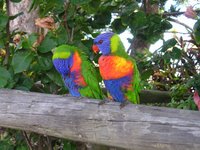 At the lifelong learning conference last week someone pointed out that there was a session at the American Library Association conference in New Orleans on June 26th The Emperor Has No Clothes: Be It Resolved That Information Literacy Is a Fad and Waste of Librarians' Time and Talent. "Two teams will debate the relevance of information literacy as we know it. Is information literacy a concept created by academic librarians to make themselves more relevant to the curriculum or is it one of our more important roles? This debate will test our assumptions and beliefs about a core element of the academic librarians' role in the educational process." Personally I think this is a bit pointless (haven't we got past the point of being defensive about it?), but there you go.

There is another session on the same day that sounds more interesting Doing Information Literacy Differently: The View from Interdisciplinary Studies "Interdisciplinary subject areas like women's studies, African-American studies, Chicana/o studies, and American Indian studies present unique opportunities for adapting and using the ACRL Information Literacy Competency Standards. Panelists will discuss using and adapting the standards in interdisciplinary areas focusing on undergraduate credit bearing courses, online modules, and work with graduate students. After the panel, break-out groups will brainstorm further ideas for using and adapting the standards in interdisciplinary areas." There are other IL sessions on previous days of the conference too. See http://www.ala.org/ala/acrl/
acrlevents/acrlatannual/ACRLannprog.htm