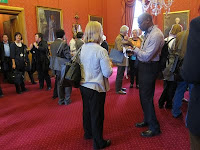 Lisa M. Given and Heidi Julien (University of Alberta) talked about Exploring Undergraduates’ Information Worlds: Conceptualizing Information Literacy from the Ground Up, at the i3 conference at the Robert Gordon University in Aberdeen http://www.i3conference2011.org.uk/. One of the goals of the study (which had other team members, including librarians) is to improve teaching of IL pedagogy in their library and information programme and they started by talking about current influences on librarians' teaching practice.
This study assesses skill development (in students in the final school years and post-school) and explores their "perceptions of how IL contributes to their academic engagement and success". This is looking at the transitional period which, I would add, is an increasing area of research interest. The focus in this research is on arts and social science students. The researchers wanted to assess students' preparation for study at university and then follow them through the first year of university study, although for practical reasons they had to use different university students (rather than following students from school to uni).
They used mixed methods:
- The "James Madison University Information Literacy Test" with more than 100 students.
- Audit of existing IL practice at Alberta University
- Qualitative study of new university students. After taking the IL test, they are using photovoice (students telling the story through photographs) and participating in focus groups.
In terms the Alberta context, a document Focus on Inquiry (2004) sets an inquiry based agenda for educators. The researchers also drew on the library's Libqual (library service quality) results, previous information literacy surveys, documentation, and eliciting student and librarian views on IL activity.
The result from the IL audit indicated that students value IL but are not aware of the support available. Although there were useful course and subject guides, it seemed they were not much used. There are IL courses, but they are targetting specific kinds of student or particular subject disciplines. A survey in 2009 had indicated that three quarters of the IL teaching was done as part of credit classes, not involving librarians.
In terms of the James Madison IL test results (this test is based on the ACRL standards) from this research project, Julien and Given reported that the results were "not encouraging" since it indicated that students were not very proficient. The strongest results were around ethical and legal issues of information.
Julien and Given presented some of the photographs from the student photovoices (they have not yet undertaken the focus groups). There was one of a student on the phone, one of a noticeboard, one of someone indicating bewilderment in library stacks, a photo of a clock, of a smartphone.
It was obviously too early for firm conclusions, but it was evident that students were arriving at university without well-developed skills (which means there is a gap between reality and the curricula mandate in the state). The upside was that this gave plenty of the University to develop skills with evidence-based pedagogy!
Photo by Sheila Webber: Civic reception last night
Posted by Sheila Webber at 12:25