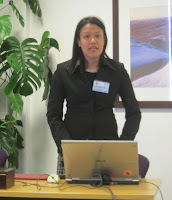 Another report from the Everyday Language, Everyday Literacies Conference taking place in Sheffield, UK, #elel2013. In the first parallel session today I heard Natasha Rappa (National Institue of Education, Singapore) talking about Understanding Re-Voicing: Renditions of the discourse of persons with disabilities by the non-disabled role-playing in a virtual world. The places of research were (physically) Singapore and (virtually) the 3D world, Second Life. I chose this session because of my interest in Second Life. In Singapore there has been work to support those with disabilities, but they remain less visible than in e.g. the UK. The speaker's aim was to get students to hear and understand better the experiences and voices of teenagers who have disabilities. Rappa's research question was: How do non-disabled adolescents re-voice the discourse of those with disabilities. She worked with three groups each with 5 people. She facilitated role playing in Second Life. Before this the students analysed news artcles about people with disabilities (looking at choices in wording and grammar) to heighten awareness and knowledge. The students compared stories from mainstream media and a society for those with disabilities, and then looked at specific individuals who had written or told their stories of disability.
Following this, the students role-played scenarios in which they role played a disabled person or people who were bully or defending the disabled person. Data collection was through students' one-paragraph responses to the question whether the disabled should be taught in special schools, a worksheet about the chosen real life narrative of disability and an essay responding to the question "the disabled are weak". The concept of "Fresh talk" (Goffman) as a result of a change in footing was important in approaching the research.
She selected some insights. One was showing how one student had re-voiced some of the arguments of his chosen "real life" disabled person, in his defence of himself role-playing a disabled person in Second Life. To that extent there was not "Fresh talk", but rather echoing another's voice in the role play. In the post role playing reflection, this student distanced himself from the role and put forward the argument of the other students, saying that the disabled person would be better of in a special school.
In her analysis the speaker had described a matrix from "Imitating" (e.g. echoing) to "Recasting" (e.g. "co-opting") with a middle ground of "melding", "juxtaposing" etc., and she noted that the students moved between different footings. The "Fresh talk" occurred more with those students who took the middle ground (perhaps because they were trying more to work out the relationship between their own identity and that of the disabled person?).
In discussion the issue emerged of the students' immersion, or lack of it, in Second Life and how that impacted their reactions, and whether the task was a bit too binary or encouraging extreme responses rather than collaborative debate. The speaker talked about practical influences on the research design, e.g. where this intervention fitted into the students' curriculum.
Posted by Sheila Webber at 12:30