Challenges for Libraries, a US Case Study #mooclib 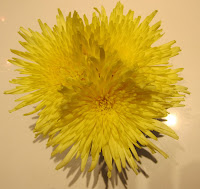 Challenges for Libraries, a US Case Study from Jennifer Dorner, University of California, Berkeley is the final talk at the MOOCs and libraries event #mooclib this morning. The university is part of EdX. My liveblogging fingers are getting a bit numb, so apologies to the speaker and you for inadequacies in capturing this talk. Also I abandoned attempts to get a decent picture of the speaker: here's a flower arrangement at the Pullman hotel (conference venue).

The speaker talked about summer courses offered at Berkeley, mostly taken by existing students and new blended on campus/ off campus courses. There were also undergraduate students (possibly on extension courses) who were not graduating within four years because of issues of accessing core classes. So MOOCs are seen against this kind of background.
She said that so far the MOOCs had been from electrical engineering and computing, though others have plans. Librarians were already providing support to summer classes etc. because those students were already enrolled, and had not been involved with extension classes where students were not formally enrolled. There was a lack of consultation with librarians initially, but the librarians have themselves drawn up guidelines. There are still issues to be worked out concerning support of the diverse range of learners. Dorner noted the range of roles adopted by other libraries e.g. some involved actively in design of materials. However, this can depend on where the library sits organisationally (e.g. if they are in the same division as learning teachnology, or educational developers it is likely the library may adopt a wider role).
Dorner talked about the group that librarians from different universities have formed, and some of their work. I think she said that one team was looking at information literacy, but she talked a bit more about advice/experience that they have shared on how to share content on MOOCs (advice/experience which they could bring to MOOC designers/teachers in their own institutions).
Dorner looked at existing MOOCs in her university to examine library-related learning objectives, or where there was potential for such objectives. They identified a range of tactics to approach teachers and help learners. Their position is that they would support the teachers, rather than trying (with limited resources) to support learners directly (this was not seen as sustainable). They felt that any faculty-librarian developments were likely to come out of existing relationship, rather than representing new opportunities for collaboration (which I would say seems a bit of a shame - but she talked about new collaboration in terms of cold-calling, whereas I would say new collaborations would come if you show that you already are out there and have experience, which would require taking the risk of developing your own MOOC, perhaps...)
Having said that, the librarians' working group also identified that creating a research skills (infolit) MOOC for universities to share could be valuable. It could concentrate on helping learners navigate the free resources available. The speaker also talked about other things which interested her (if she could find the time) which did involve interacting with learners, encouraging them to crowdsource etc.
Posted by Sheila Webber at 12:43