The opening keynote at the CILIP Umbrella conference #ub13 in Manchester, UK, today, was from Roly Keating, Chief Executive of the British Library. His talk was entitled: Born digital? The British Library at 40. He started by putting up some of the statistics about the Library's holdings. This was a bit nostalgic for me, as I worked for the British Library for 13 years, starting in 1980. Keating highlighted that Apple and Microsoft were founded just a couple of years after the Library was founded (its foundation brought together existing organisations like the British Museum Library, the National Reference Library for Science and Invention). He mentioned that there were differences in culture between the organisations (which I can testify to), but he felt that digital developments and the move to the new British Library at St Pancras has brought people together.
Keating talked about things like the business innovation service (which is now partnering with city libraries), its exhibitions, events and education programmes. Along with its development it has had to change its organisational structure: now into - audiences, collections, finance and operations, with a Chief Digital Officer and Chief Executive at its centre. He noted that since only 1% of the Library's vast collection (which includes millions of books, patents, stamps, recordings etc.) was digitised. This is why, for example, they have partnered with organisations like Google, as digitisation is not something that the Library can afford on its own.
In particular Keating drew attention to the digitisation project for newspapers (which are particularly fragile and important social records), with Brightsolid: for the first 10 years the digitised papers are part of a subscription service, but after that they become open access. There is also going to be a newly built research room for news and media. Thisd connects with projects to capture and archive more video and audio news sources e.g. from the BBC. 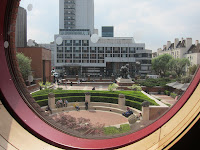 Other projects he mentioned were geo-referencing (crowd-sourced) and having donations of archives of writers - but with the added archival challenge of working with authors' emails as well as digital and paper documents. Keating announced a partnership with Arts Council England and Local Government: a competition with 10 awards of up to £45,000 "to support local economic growth with the business and intellectual property national network."
Digital copyright deposit has finally come into law in the UK (in April this year) which means that there is even more of a challenge, but it does give the Library the right to store "the UK web domain". There is likely to be an annual trawl with more frequent collection of some specific items. It's called the UK Web Archive, and involves the cooperation of the other British copyright libraries (e.g. the National Library of Scotland)
Photos by me: Keating presenting, and a photo I took of the Library's courtyard at St Pancras, from inside the conference suite.
Posted by Sheila Webber at 10:54