Why do I MOOC, the experiences of a MOOC learner #mooclib 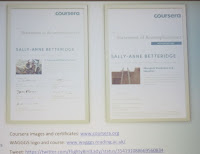 The only formal talk this afternoon at the MOOCs and libraries event #mooclib was Sally-Anne Betteridge, University of Birmingham, on Why do I MOOC, the experiences of a MOOC learner.
She is a graduate trainee in professional services, and a recent graduate. She was interested through curiosity, an element of professional development and also initially the idea of continuing "academic" study. She signed up initially for courses on Gamification (which she enjoyed, but she moved house before it finished which was very- time-consuming, so she will finish another time). Then she did the Education and Digital Cultures course (i.e. the one Sian Bayne talked about earlier) which was her favourite course ("I still speak to a few of the people I met through that course"). Ones on Aboriginal Worldviews on Education and The Camera Never Lies have been enjoyable in terms of content, but not so good as regards the way they are delivered. Thyere was one on art education in museums (sorry, didn't get the title) which she was currently following. She has also done World Association of Girl Guides and Girl Scouts Leadership Development Programme - she wasn't sure it was really a MOOC, but she included it as it served the same sort of purpose, involving online learning with people she didn't know. There were also 3 she signed up for but which she never even started, but she stressed this was for personal reasons, not because of the courses.
She noted that her favourite course did have any lectures! She did not like recordings of "proper" lectures (i.e. in a lecture hall "it was like I was watching other people learn"), and preferred the Gamification lectures where it was simply the lecturer talking at his desk.
She preferred "in course" assessments to ones where you had to do something outside the course structure. She did not like "endless multiple choice quizzes". Where the assessments were interesting she did them, even when they were optional.
In terms of interaction, she preferred Twitter to discussion boards (which seemed to link back to poor experiences of discussion boards in formal learning). It was good when interaction through social media was encouraged. She hadn't been to a face to face MOOC meetup, but hadn't been to one yet - but mostly because there hadn't been one in her home city.
Sally-Anne talked about course resources. They usually seemed to be open access (since she could access them), with a lot of BBC and Guardian articles, and some other news sources. Some resources were only available in one particular country (e.g. only in Canada). As a result of these problems, she didn't tend to go and read additional resources. For quizzes, she might skim (rather than try to understand) resources, which is why she preferred other types of assessment (i.e. the quizzes didn't help her learn anything).
Finally, she enjoyed the experience, but she didn't feel it served any real academic purpose, so she wouldn't see it substituting for formal education and she wouldn't be interested in certification or paying for a MOOC. However, she mentioned that the EDC course at Edinburgh had led to her considering their distance Masters course, and left her with a good opinion about Edinburgh University. She also mentioned another MOOCer saying that she used MOOCs to judge the quality of universities that she might want to study at.
The rest of the day is a workshop, so I will not be liveblogging those, as I need to be a live participant instead! I will probably blog about it afterwards, though. Inj fact I have some further thoughts on Sally-Anne's presentation too, but I had better stop, since I'm currently not concentrating properly to the briefing for the workshop exercise....
Posted by Sheila Webber at 14:33