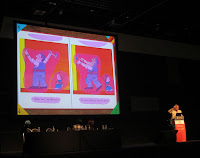 Exploring the role of public libraries in supporting intergenerational literacies through ICTs is the next paper I'm liveblogging. It was presented by Hui-Yun Sung (National Chung Hsing University, Taiwan, China) and John Siraj-Blatchford. The full paper is at http://library.ifla.org/152
This was in the second session which was co-organised by the Information Literacy section, with the Reading and Literacy group at the IFLA World library and Information Conference in Singapore on Intergenerational literacies.
This presentation was introducing a research project currently in the pilot stage. A number of roles for public libraries in supporting intergenerational literacies were identified including "supporting a community of practice through online channels" and the introduction cited various important theories concerned with early years development which underpinned the research study being presented.
They are doing a qualitative, exploratory pilot study at the National Library of Public Information in Taiwan. They want to change the symbolic understanding of technology from a toy to something different including an information tool. Research questions include what motivations parents have in interacting with their children, and identifying interactions around ICT used for storytelling/creation. They are collecting data using social networks (Facebook) and also semi-structed interviews and participant observations. The speakers are identifying storytelling software/apps which can be adapted from individual use to collaborative use. So far this includes MeBooks (available for iPhone, iPad, Android) which includes editing e.g. adapting text and recording new sounds (storyline and pictures are fixed). This is something which typically young children wouldn't be able to do without adult help.

Another piece of software, from the Open University, enables you to create a story with your own pictures, using a storyboard. The final example is The Land of Me, which takes the child through an imagination game: in the demo given by the speaker Buggy Boo the bear chooses to pretend to be a vehicle and chooses the type, size and colour of a vehicle. The inteface includes text prompts and suggestions for the adult with the child - so this is another example with intergenerational playing in mind. Theyare seeking further collaborators for this research internationally.
Posted by Sheila Webber at 06:30