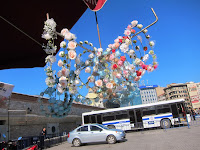 Empowering through Information Culture: Participatory Culture, a Stepping Stone? A Theoretical Reflection was the next paper, from Yolande Maury, at the European Conference on Information Literacy.
Firstly she noted that statements about IL talked about empowerment and participation, but with some lack of definitions. "Empowerment" itself was an ambiguous concept with the ideas of power to act and of development in order to have impact; however "action is not enough" - there was a need to understand the links between action and the context in which you take action. The speaker also identified a lack of definition when talking about "power" of information. There might be various forms of power e.g. as a catalyst for change, as an emancipatory process; there was some logic in liking these ideas with shared knowledge using social media.
Maury noted the new relationships with media, markets and audiences, and the resultant claims about the potential of new media, with the idea that people could act and communicate, and be co-creators and actors in the process. So, was this really a new possibility or "a form of policy marketing speak"? For example, social media were seen as implicitly as interactive, even though now research studies show that not everyone uses these tools as creators or in a truly interactive way. "Community" is also seen as something desirable: whereas one might trouble that idea.
Maury said that (for example) "action is not a guarantee of empowerment" and that there was a confusion between consumption and contribution. She felt is was necessary to take an information view of this process.
The challenges she put forward included "providing tools for thinking in a comprehensive and generic way" which might (for example) include developing a new common language about this area of communicating and participating; "a (re)configuration of information culture in a more cultural and holistic way" (bearing mind that la culture d'information is the more holistic translation of information literacy, in French).
Photo by Sheila Webber: Flower circlets in Taksim Square, Istanbul, October 2013 (these are apparently worn by young girls)
Posted by Sheila Webber at 11:59