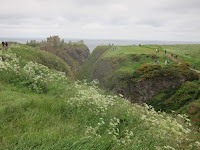 Nearly the final session of the i3 conference .The last presentation I attended was authored by Laura Muir and Chikezie Emele, and presented by Emele, on Improving chances of prostate cancer survival in black African men: a study of the information needs of this high-risk group in the UK and S.E. Nigeria
Prostate cancer is the most commonly diagnosed cancer among Nigerian men: Emele presented some statistics showing the high prevelance, and identified that even this is not likely to show the true extent. There are "health disparities in diseases and mortality in the African rural population", but even the services in the cities are not great. Emele gave some cultural background and also noted that there is a growing shortage of healthcare workers in rural Nigeria (e.g. because of travel difficulty). Therefore it becomes even more important that information is available in other ways (for example through the radio) and not just dependent on healthcare workers. Emele also showed how in the UK awareness may be spread e.g. via official leaflets, whereas in Nigeria he used an example of a van going round raising awareness but also selling a "remedy".
The aim of the research is to develop a deeper understanding of the information behaviour of rural dwellers in South East Nigeria (plus evaluating needs, identifying cultural issues and developing a strategy to improve things). Emele did a pilot study with Nigerian men in the UK. He developed an approach of "on spot interviews" - engaging people in conversation about the research (e.g. having gone to a meeting of a Nigerian association) and then asking them to be interviewed there and then (as it was difficult recruiting people in other ways). Emele also did 2 focus groups.
Moving on to the main study, he did case study research. He used focus group, interviews and observation. The men were found to have little prior knowledge about prostate cancer - many had not heard about it before. Emele found the younger the men were, the less willing they were to see a GP or get tested, thinking that as they were younger, there was no need. The men did not seek health information, but showed interest when shown leaflets and videos. The visually-presented information was more effective, it was more interesting and easier to assimilate. Emele found that interpersonal information from trusted sources (peers and church elders) was preferred.
Emele also found that many men associated prostate cancer with sexually transmitted diseases (perhaps because it was in that area of the body): therefore they feared that their wives would think they had been unfaithful if they talked about testing or symptoms. Health information was, for example, transmitted at second hand via elders, taken from the radio etc. which could lead to misinformation. This also links to underlying problems of illiteracy and poverty.
In summary there was reluctance to find information, there was no available information in the rural communities, most of the men had not heard of prostate cancer and would not recognise the symptoms. Emele concluded that presenting health information in appropriate formats which are culturally accepted is needed, and he is developing a conceptual framework. He aims to extend his approach to other health areas and test it elesewhere.
Photo by Sheila Webber: possibly the final photo of Dunnottir castle ;-)
Posted by Sheila Webber at 13:04