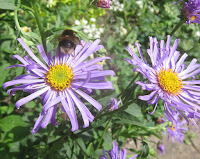 The Pew Research Center's report on Americans’ Internet Access: 2000-2015 uses the data they have collected anually on the internet habits of people in the USA. Headlines include:
"Older adults have lagged behind younger adults in their adoption, but now a clear majority (58%) of senior citizens uses the internet" with seniors showing higher adoption rates than young people (because there are still more of them not using teh internet).
"While Less-Educated Adults Are Catching Up, Their Internet Adoption Rates Are Still Below Those of College Graduates"
"Those In Higher-Income Households Are Most Likely To Use Internet"
"English-speaking Asian-Americans Are the Most Likely To Report Internet Usage"
http://www.pewinternet.org/2015/06/26/americans-internet-access-2000-2015/
Photo by Sheila Webber: bee, July 2015
Posted by Sheila Webber at 19:31