Wrapping up #i3rgu - plenary and links

A final report about the i3 conference held 23-26 June 2015 at Robert Gordon University, Aberdeen, Scotland. I will say a few words about the plenary discussion sessions, and finish with some links.
One of the nice features of the i3 conference is plenary discussion programmed into the conference. As usual, session chairs were asked to identify important research themes from their sessions, and there was a plenary session earlier in the conference where (in groups) we identified some of the important themes and questions that had emerged so far. The final plenary session brought this previous work together and bringing together key themes, goals and questions to take from the conference. Unfortunately I had to leave before the end of the session, but, from early discussions, there was one strand emerging to do with research methods, one to do with topics or research questions, and one to do with communicating research and creating impact.
There was a very wide range of research approaches and methods used in different presentations at i3, from highly quantitative analysis of “big data” through experimental studies, mixed methods such as case study, to a whole variety of qualitative approaches (e.g. practice theory, phenomenography, ethnography). This generally was seen as a positive feature (both of the conference and the field!)

There was more debate about the output of research: Ross Todd had said at last year’s European Conference on Information Literacy that there were too many models, and we should concentrate on consolidating and testing the research models we already had. Whilst agreeing that large scale studies and metanalysis are valuable, I am one of the people who don’t see why producing new models should be a bad thing in itself. Information Literacy and Information Behvaiour are complex fields, and one of the major research themes emerging through the past decade has been the importance of examining IL and IB in context. This seems rather the opposite of trying to develop a grand theory of everything (though what Ross was saying was not quite that ;-) 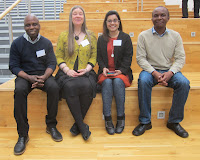 In terms of research topics, it was agreed that the growing body of research from contexts outside the developed North/West was important and should be given attention. More generally, looking at research problems in different socio/culturalcontexts was still important. Talking with delegates afterwards, key points from the talks by Olof Sundin and Dorothy Williams resonated (e.g. thinking about how/whether we were addressing the “big questions”; being bold!)

I realise that one of the presentations I haven’t blogged in my own! It was on “Self-reported information behaviour in a MOOC”. I am giving another presentation on MOOCs in a few days time, which will be longer than my i3 talk, so I may just put that one on Slideshare, as I don’t think it’s very useful to have several presentation on Slideshare with only marginal differences.
Therefore I will also (rather belatedly) wrap up my i3 reporting at this point, with my usual links to other sources of information about the conference.

- Conference website http://www.rgu.ac.uk/research/conferences/i-2015
- My i3 blog posts: http://information-literacy.blogspot.co.uk/search/label/i3rgu
- Twitter stream: https://twitter.com/hashtag/i3rgu?src=hash - I'll particularly mention Hazel Hall's tweets, find them here https://twitter.com/search?q=%40hazelh%20%23i3rgu&src=typd&lang=en
- Blog post from Frances Ryan: http://www.justaphd.com/2015/06/presenting-a-paper-assessing-the-available-and-accessible-evidence/ and her powerpoint http://www.slideshare.net/justfrances/ryan-presentationi3online
- Hazel Hall provided links to six papers presented by Napier University students and staff: http://hazelhall.org/2015/05/11/six-papers-at-information-interactions-and-impact-i3-2015-and-a-preview-of-idocq-2015/ and a conference report at http://hazelhall.org/2015/07/20/a-week-in-aberdeen-at-idocq-and-i3-2015-idocq2015-i3rgu/
- A tweet showing me feeding back in one of the discussion sessions! https://twitter.com/IMRGU/status/614424588836052992
- Ethnographically-inspired usability testing Leah Rosenblum Emary http://www.slideshare.net/leahemary/ethnographicallyinspired-usability-testing
The first photo is by Peter Reid, showing the plenary session. The second shows me and the PhD students who presented at the conference: l to r, Joseph Essel, me, Syeda Shahid and Kondwani Wella.
Posted by Sheila Webber at 09:42