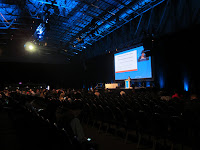 The archaeology academic Alinah Segobye opened today's proceedings at the World Library and Information (IFLA) Conference taking place in Cape Town, South Africa. I'm liveblogging, so note that these are just my impressions of her thoughtful and passionate talk.

After reflecting on some of the anniversaries and current world issues, Segobye went on to consider Africa's place in the global development agenda. She mentioned Agenda 2063 which articulates a vision for the future of the continent ("A global strategy to optimize use of Africa's resources for the benefits of all Africans"). There is an issue of how to get the African citizens to own this agenda, since citizen involvement was vital. There were challenges to the region, for example HIV/AIDS, inequality, ongoing conflict, and the impact of climate change. However, the region has also seen peaceful transitions of government, some rising stars in economic terms, and a young population which can be an opportunity for development and growth.

Segobye then highlighted the South African National Development Plan 2030 which she saw as ambitious and challenging, but very hopeful. She identified "why knowledge matters" in this context (and she included libraries in supporting the knowledge agenda) - she saw knowledge reducing inequality, realising a developmental and capable state, and helping it to develop from a mineral-dependent economy to a knowledge based economy. Knowledge could also help the "rainbow nation" of South Africa broaden social cohesion and unity.

Finally Segobye talked about the issue of gender "No woman left behind: why gender matters". She emphasised women as key to knowledge development. She celebrated librarians as having strong women as practitioners and role models attaining positions of leadership, and librarianship as a discipline in transforming with the times. She saw librarians driving not only only their own development but also the development of others. Segobye talked about her personal experience of librarians helping her to get through her studies, for example by looking after her young son in the library.

Segobye saw the empowerment of female children as central to human development, including keeping young girls at school and enabling them to make informed choices about their futures (including helping them to avoid inwanted pregancy and avoiding contracting HIV/AIDS). Thus gender equality was important to the future of the continent. She saw women as custodians of Indigenous Knowledge (IK), with vital roles in health and nutrition, culture and education, and also beauty and aesthetics. Segobye mentioned here the issue of intellectual property, both in terms of acknowledging the originators of products (e.g. where it originated with IK) and in unlocking opportunities for innovation.

This brought the issue round to the importance of data, information and knowledge in all sorts ways to support sustainable development. Libraries were vital in helping transform and support citizens. This could help people learn, create, innovate and share to achieve the visions embodied in the 2030 and 2063 agenda.
Posted by Sheila Webber at 08:25