Information and Awareness for Sustainability #ecil2015 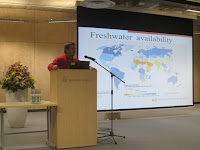 The first invited speaker today at the European Conference on Information Literacy 2015 in Tallinn was Mikhel Kangur, on Information and Awareness for Sustainability. The key theme for the conference was sustainability and green issues.
He started by defining sustainability and highlighted the particular problem areas for earth e.g. population, scarcity of fresh water, climate change, threat to the biosphere. He then talked specifically about Estonia: environmentally they were in a relatively safe position, but this could be a trap. Estonians (according to surveys) consider themesleves quite environmentally aware. However, behaviour or mentality of Estonins gives a different perspective: a survey had shown that Estonians scored lowest in Europe in terms of considering water or energy conservation, or reducing waste in everyday life. A survey asking them about their behaviour showed that Estonians scored low in terms of, for example, participating in action groups. He showed an interesting diagram which showed that Baltic countries (including Estonia) were different from the "protestant Europe" group (including Nordic countries) in terms of "Survival vs. self-expression values". Thus although the Estonian economy was comparable, there was still this difference: there was knowledge about the problems, but not so much the will to change (and Estonians are not alone in this).

Also Kangur noted that there was a lack of holistic systems looking at all these issues together. He took an example of the Baltic sea, and showed that there were various Governments/ organisations responsible for it, who did not necessarily collaborate to ensure its sustanability. Although there are techincal solutions being developed (for example, to desalinate salt water) these are expensive (and therefore not necessarily sustainable.

Thus there is a need to go beyond just informing people, and raise consciousness that people must take action snd change their behaviour, otherwise nothing will change.
Posted by Sheila Webber at 07:50