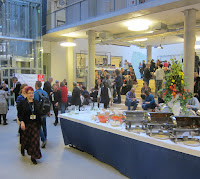 The final talk I attended today at the European Conference on Information Literacy 2015 was Information-seeking Behavior and Information Needs of Farmers in Turkey and Sweden: A Comparative Study from Demet Soylu, Nilay Cevher and Marco Schirone. I'm drooping a bit at the end of the day, so usual apologies to the speakers if this isn't a good representation.
The speakers identified that farmers encounter problems, both do to with their farm produce and the more general economy, climate etc. Previous research has identified that farmers benefit from national systems to support the farmers' information needs. There may also be issues of farmers' literacy.
This study investigated the needs to two areas, in Western Sweden (a developed country) and a comparatively less developed region of Turkey, Fethiye. A questionnaire was used for both countries, using both print and online (36 respondents in Sweden, 38 in Turkey) Additionally in Turkey there was an interview with farming associations, and for those Turkish farmers who were illiterate, there were phone questionnaires.
The educational and literacy levels were higher in Sweden. The biggest needs in Turkey were seed and product cultivation and other physical aspects (more so than in Sweden, where there was more interest in market prices and day to day trends). The Swedish farmers were using libraries to find information, in contrast to Turkey.
Recommendations included "green spaces" in libraries, and courses from libraries, but most of all there was a need to tailor services and information to the local needs of the farmers, which the study showed were varying.
Photo shows another view of lunchtime at the conference
Posted by Sheila Webber at 13:12