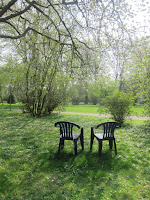 The final talk of the day European Conference on Information Literacy 2015 is from invited speaker Olof Sundin, speaking on Outsourcing Trust to the Information Infrastructure: A Socio-Material Perspective. An underlying theme is the need to understand what is going on in the search engines and devices that are relied on so much, and mediate so much information, nowadays.
The first thing he looked at was the changing learning environment in schools. Theses changes mean that there is an increase in active learning, looking at many websites rather than one book, with more digital media, ubiquitous access, new ways for mediating knowledge, and possibly with knowledge itself more subject to market forces. For example, the top hits on Google may be said to be there because of market forces. Sundin gave the example of a search on climate change where suggestions for search (from Google) included prominently "climate change hoax": the top hits, as readers will know, depend a lot on the popularity of sites (in links and clicks and various other - secret- aspects).
Sundin then cited a Swedish National Agency for Education survey from 2013 which showed that students of about 13-15 years thought they were pretty good at searching and evaluating (Sundin noted that the fact that search is not seen as a problem IS the problem).
This forms a background to Sundin's research. He identified that, in this research, he took a sociomaterial perspective, saw humans as coproducing knowledge, and people as "actors translating their activities in relation to each other" (so people are acting and reacting, I think also in relation to the tools as well as each other). Thus people's source evaluation practice is shaped by the nature of the technical/information infrastructure and sources themselves.Sundin identified Google as "obligatory passage point": something that people had to engage with in order to act and progress.
Sundin then presented some insights from the project on Knowledge in the Digital World (KDW). This is funded by the Swedish Research Council, and investigates practice of information seeking in everyday life and at school. They have been collecting qualitative data and Sundin presented some vivid quotations that showed how search had become an intergrated part of everyday life. In a focus group there was a response to a question about when you didn't search - and answers frpm participants were that you only didn't search if the internet was down, or your phone battery was flat.
Regular readers of this blog will remember that I blogged a talk from Sundin at the i3 conference, and there he introduced a phrase "search-ification of everyday life", which captured people's imagination at the conference. He also introduced it here. It indicates how many different kinds of information were accessed, or mediated,via a search engine. Search engines, particularly Google, have thus become naturalised as an unquestioned part of people's lives.
This means that people "outsource critical evaluation of information to Google" (by accepting the top hits). So "Search engines are not just tools for finding information, they are also technologies for establishing significance".
Sundin concluded by calling for a renewed interested in search as an object of learning, with searching seen "in a critical light" rather than being regarded as neutral. This information side needs to be addressed critically as part of media and information literacy research. This involves probing the information infrastructure which is hidden beneath the seeming simplicity of the search box: highlighting that this seeming simplicity is actually complex.
Another old photo: Olof is from Lund University and this shows a picture taken in the grounds of Lund University by me in 2013
Posted by Sheila Webber at 16:37