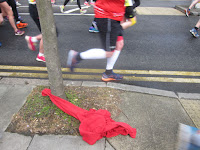 Carrick Enterprises is developing the Threshold Achievement Test for Information Literacy (TATIL), which "helps faculty and academic librarians better understand the level of information literacy achievement of their students. The Test is inspired by the ACRL Framework for Information Literacy for Higher Education which was adopted in February 2015." It is being trialled at the moment. Frankly, I wouldn't have thought a testing approach was altogether consistent with the Framework philosophy, but if you are interested go to https://thresholdachievement.com/
Photo by Sheila Webber: thrown-away sweater, London Marathon, April 2016: the early route is strewn with disgarded gloves and sweaters, sometimes you have to duck to avoid them
Posted by Sheila Webber at 11:00