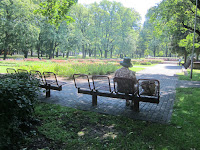 Further impressions from the 2nd European Media and Information Literacy Forum and the session on Human Rights and Healthy Democracy, Countering Radicalization and Hate Speech.
Maciej Tomaszewski, Policy Officer - DG JUST, European Commission, highlighted work of the European Commission in this area. They recently launched a Code of Conduct on illegal online hate speech https://ec.europa.eu/digital-single-market/en/news/european-commission-and-it-companies-announce-code-conduct-illegal-online-hate-speech (it was launched by the Commission together with Facebook, Twitter, YouTube and Microsoft) There is a public consultation on the state of hate and pluralism in Europe http://ec.europa.eu/justice/newsroom/fundamental-rights/opinion/160519_en.htm and you are urged to respond

Finally, Ivana Jelaca, Head of Media Diversity Institute (MDI) Western Balkans, started by explaining the work of the Institute, which aims to encourage and facilitate responsible media representation of sicial diversity. It focuses on developing young people's MIL skills (critically understanding media and producing media content). The website is at http://www.media-diversity.org/en/ and it is worth looking at the "Resources" section. Jelaca identified the Western Balkans as a region in transition, with still some obstruction to the process of democratization. She noted the focus of young people's interests - a survey had shown only 31% thought civil engagement was "in", whereas 70+% thought appearance was very important. She showed some of the reports in the media which were stirring up racial hatred etc. Whilst traditional media "hadn't learned much from the experience of the 90s", young people were turning also to social media: the speaker gave an example of a video on social media with hate comments on ethnicity and (for a female) appearance.
The Institute is doing work to help raise awareness and skills, and support young people in producing material which has a counter-narrative, promoting a culture of non-violent dialogue , and combat trolling. They are producing guidelines on countering hate speech with speech, examples of how to avoid the tropes of hate speech. They are also building coalitions between media and citizens & civil society organisations.
Photo by Sheila Webber: park in Riga, June 2016
Posted by Sheila Webber at 08:43