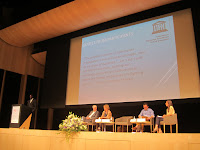 Last day of the 2nd European Media and Information Literacy Forum. The first plenary session is focusing on Human Rights and Healthy Democracy, Countering Radicalization and Hate Speech; Intercultural and Interreligious Understanding and we started by standing in silence to remember the victims of last night's terrorist attacks in Istanbul.
After an introduction from Imants Viesturs Liegis (Ambassador to France, Permanent Delegate of the Republic of Latvia), introducing the theme, the first speaker was Ewa Thorslund, Director, Statens medieråd, on Swedish Media Council: the big picture. This is a government organisation with the mission to empower young people in the media. She identified that to some extent the rise of extremism on the internet is the result of underlying changes in the media landscape. Key changes are: concentration of media ownership: few media actors but who have more power, also apropriating user content; fewer professional journalists, more "robot journalism" and more PR people; "appification" more people locked into applications (perhaps leading to decline of the open web)
Secondly, there is "digividualisation": people living lines online; filtering; private and public blurring; moving to self-regulation and user-cintracts rather than protection via legislation. Thirdly, there is the "crisis of authority and dissolution of communal narratives": fragmented media landscape; people living in selective information bubbles; an expansion of what is considered normal (normalisation of things that many people "like": this has positive or negative aspects).
All this means that there are increased requirements for Media and Information Literacy!
Thorslund then gave insights into a project that investigated how extreme groups were recruiting young people and what could be done to counter this. The 3 extreme groups examined were: far right, far left, muslim extremist. All 3 conveyed a black and white picture of the world, used a "clear self defence rheteoric", idealised direct action and used stories. It was identified that extremists were "fact resistant" and thus were not going to be swayed by counter narratives. Thus people needed the MIL skills to see through the propaganda. Finally, it emphasised how people had to deal with these issues as individuals, on their own, and MIL could support them in this.
The Swedish Media Council website is at http://www.statensmedierad.se/ovrigt/inenglish.579.html and an English-language version of the report are http://www.statensmedierad.se/publikationer/publicationsinenglish/proviolenceandantidemocraticmessagesontheinternet.605.html
Alton Grizzle (Programme Specialist, Communication and Information Sector, UNESCO) talked on Youth perspectives on online hate, extremist and radical content: some preliminary research findings. This is based on work by UNESCO and Grizzle's doctoral work. He first reflected on why people hate - there can be many reasons, including misinformation.He asserted that MIL can change how we see things, and this required the active partcipation of young people.
For the research, the research question was whether different attitudes towards hate and radical content correlated with different levels of MIL competency. The participants were young people taking a MOOC on MIL. 1735 completed the questionnaire, and 614 a questionnaire on hate content. The majority were in urban areas, and the majority were in education. 55% had never before taken a course related to MIL. 63% were taking an online course for the first time. About 80% said that hate groups should not be able to post online. 50% said they had watched extremist content online. About 70% said they had encountered the content, most did not share it. 51% said they are not sure how to respond to the content. 50% ignored the content. 60% said they encountered the content on Facebook, the next most frequent was Youtube. The young people thought there were various reasons why extremist material was posted (religion narrowly the most frequent). The young people were asked whether they thought that MIL could help young people cope with extreme and radicalised content, and a large majority thought it could (this was asked after they had taken a unit of the MIL MOOC).
Grizzle identified a number of emerging conclusions e.g. the Freedom of Information implications of simply censoring; the power of not searching or not watching hate videos; that young people are coming across hate material accidentically as well as when they are seeking it; that more MIL training is needed; counter measures are needed in social media, as this is a place where much content is encountered. MIL CLICKS is a new GAPMIL and UNESCO initiative to respond to this need, which is being launched
Posted by Sheila Webber at 07:59