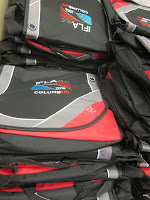 Next I'm liveblogging, at the IFLA World Library and Information Congress in Columbus, USA in a session on libraries and the UN 2030 goals, Jack Hang-tat Leong (Richard Charles Lee Canada-Hong Kong Library, University of Toronto, Canada) talked about Library services for immigrants and refugees: actions and principles from a global perspective (full paper at http://library.ifla.org/1334/1/081-leong-en.pdf)
He started by highlighting that in 2015 244 million people lived outside their original countries. The multicultural library manifesto has been endorsed by IFLA and UNESCO. This is at http://www.ifla.org/node/8976 and Leong highlighted some of its principles. Libraries are asked to pay special attention to groups that are often marginalised. Services should be an integral part of library services, not an add on.
There are challenges, for example lack of material in targeted languages, lack of demand in fact indicating inadequate services, and special needs of the highly educated migrants.
Staff need good language and communication skills; there need to be regular community analysis; connecting with the life and activities of the various communities is valuable. Some examples he gave were the Arizona Public Libraries serving Spanish-speaking patrons, http://Mylanguage.gov.au, and Libraries without borders (idea boxes for refugee camps). You can find more detail and more examples in his paper (linked above).
Photo by Sheila Webber: conference bags, WLIC 2016
Posted by Sheila Webber at 20:35