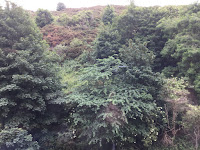 Today I’m at a seminar at Napier University, Scotland, organised by Professor Hazel Hall and Frances Ryan. It’s called Connecting People Connecting Ideas, and is focused on sharing ideas for research and identifying priorities.
Most of the day is about discussing the ideas, but it is starting with a talk from Simeon Yates, on Ways of being in a digital age. This is the title of an ESRC-funded research project https://waysofbeingdigital.com/ (which I see included someone from University of Sheffield, which demonstrates again that academics don’t know what’s going on in their own university, or that academics keep their research to themselves (or both ;-). The project has produced a report, but the ESRC (Economic and Social Research Council, a major funding body in the UK) is still mulling it over (it commissioned it in order to steer its research priorities), so he was just able to indicate some themes.
He started by going back to Marshall McLuhan, with the idea that we would become connected, and Yates showed graphs indicating the growth in the numbers of communication media from prehistory to the present (obviously, with huge growth recently). He talked about the need for (and challenge of) interdisciplinary work. For example, the power of bringing together artists with people in information science and medicine, to look at a medical issue from a new perspective. He also emphasised the constants of culture and human interaction (e.g. gender differences in how peopel interact via txt msg is certainly not just to do with technology).
One of the foci for the project was probing the naure of digital inequality. He emphasised that some things that are associated with age/generation are actually cohort factors (e.g. young people may consume more digital media, but they also consume all sorts of other media, and it could be more to do with older people generally consuming less media because they have other things to do in their lives). He showed some interesting cluster analysis using Ofcom data, which e.g. showed the correlation with social class.
Another project he mentioned as I'd hide you (in which performers with webcams went round cities and tried to spot each other with enagagement from the public online: Yates mentioned a moment when the social/digital divide emerged starkly when a performer went to a good spot to hide and there were homeless people using that "hiding place" as a place to stay. That was an encounter between the digitally superserved and underserved. Yates was also referring to an Ofcom research project/report I have mentioned before on this bloog, which showed that although people with less money were apparently online, their dependence on what they could do on a mobile phone limited their options (e.g. they needed a better computer to fill in job seeker forms) and also didn't develop some useful skills.
He also looked at the various studies (again including a Pew study that I think I blogged here) that showed that people with different poltical opinions consumed and shared different media, with not a huge overlap. Finally he showed evidence that, whilst previous industrial changes had created different types of jobs, technological change did actually seem to meaqn reduction in jobs.
Photo by Sheila Webber: view out the window from the seminar!
Posted by Sheila Webber at 11:42