Information behaviour in online health forums: the importance of trust and empathy #ECIL2018 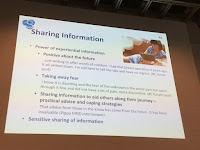 This morning's keynote at the ECIL conference in Oulu, Finland, is Peter Bath presenting on Information behaviour in online health forums: the importance of trust and empathy in sharing information, experiences and emotions. Peter is Professor of Health Informatics in my department, the University of Sheffield Information School.
He was talking about a project he had been working on for about four years, a Shared space and a space for sharing. This has been a large scale project with £1million funding (from the EMoTICON project), shared between six universities. The project bid emerged from an intense "sandpit" event. The name of the project signals that "the web is a vast shared space: by sharing information, individuals create the real value and significance of the web". Thus it is both a shared space and a space in which things can be shared. Common to all the parts of the project was an interest in how people in extreme circumstances use the web, the intersection between empathy, trust and sharing (and an interest in finding out whether sharing was based on empathy and trust). The Sheffield University workpackage was looking at people with terminal or lifethreatening or long term health conditions. Others looked at, for example, people in humanitarian crisis, those seeking organ donation, those experiencing drug addiction.
Looking more specifically at the work in Sheffield, they focused on two illnesses: breast cancer (life threatening, and a long-term condition, but with increasingly good survival rate) and motor neurone disease (also known as ALS) which is incurable and life shortening. The researchers collaborated (1) with the Breast Cancer Care Forum. This forum is split into boards that reflect different aspects of the breast cancer "journey" (2) the Motor Neurone Disease Association (which has an online forum). These two organisations allowed data download so that the forum posts could be analysed, and also helped the researchers recruit people to interview (people with the disease and forum moderators). Thus they were gaining an insight into how and why people were using the forums and how they felt about it.
Bath stressed the ethical issues: for example although it says in the terms and conditions for the forum that the posts may be used for resrarch, it is quite possible that people haven't taken in that this is the case. The researchers change the wording of quotations, so that they can't be searched and traced back to the individual.
Bath moved on to talk about the process of diagnosis, and how this was different in the two diseases: for example with breast cancer people usually have an idea that something is wrong, with MND the diagnosis can come out of the blue, with little information given at the time. Thus with MND people might go home and start searching for information about the condition. There is fear of the unknown, and also people will have individual experiences of the condition, so you can't know that the way your health progresses will be the same as another person with the disease.
Many questions crowded in - for example how it would impact thir loved ones. Their is a lot of power in sharing information (see photo) both sharing your own information, and gaining information about what the future might be, by hearing about other's experience.
This information can be very sensitive: not just about the person's own health, but how their family is reacting, so discussing others as well as themselves. From that point of view, the role of the forum moderator is very important. Sharing emotions is important, as ill-health has a high emotional impact, people are unburdening feelings (though the etiquette is that you don't do this all the time). Feelings are also validated, realising that "what they're feeling is ok".
People shared their stories of parts of the journey, including stories of survival, giving hope that others could also survive. They also shared everyday information (such as going out) and shared humour which might inclide in-jokes. This feeling of being understood, and having people going through the same experience as you, was important. There are things they may not want to share with friends and family (e.g. discussing your own funeral arrangements when your spouse is not ready for that conversation). 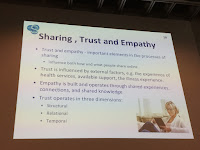 The project discovered that trust and empathy were indeed important for sharing information. There is a sort of (positive) snowballing effect in sharing. The researchers identified three dimensions to trust. There is a structural dimension to sharing: the structural affordances of the forums was important (e.g. separate boards for people starting chemotherapy each month). Different kinds of sharing go on in different boards. Formal procedures were also useful, for example rules that people did not post details that could identify them (e.g. email address). The presence of a proactive moderator was important in creating trust in the board. The fact that the board is there 24/7 is also important (someone may psot in the middle of the night as they can't sleep).
Secondly, the relational dimension was important for trust included: using appropriate tone when posting; being reciprocal; not claiming you had more expertise all the time; and "seeking or demonstrating similarity with other users". Thirdly, the temporal dimension was important, since developing relationships, and understanding how the forum works, takes time. Aditionally, "Trust is processual and fluid" and isn't unchanging - things may happen which make people less likely to share.
Empathy was built on the shared experiences, and on connections ("We all have a real need for this forum as a platform for our fears and anxieties, for advice, for guidance, for solace, and for friendship" - quote from the forum). The shared experience on the forum was different from a feeling of "being set apart" by the illness in their everyday life.
There was of course a down side to the forums. For example insensitive sharing, sorrow because friends on the forum will die, feeling left behind when people recover and leave the forum, feeling that they need to stay in the forum to support others (when they actually feel ready to leave).
Bath finished talked about how the project had worked with a theatre company to produce a play with 5 actresse using quotes from the project. After performances there is audience discussion. They have given about 6 performances, including at a hospice, as part of a local arts festival and Bath showed an extract from it. They have also produced information sheets and had a photographic exhibition which has been shown in various places.
Bath concluded that forums were important places for support and information, and trust and empathy were a vital part of their success.
Posted by Sheila Webber at 08:35