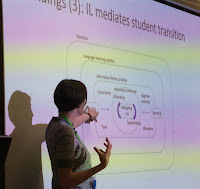 This is Sheila at the LILAC Conference. The session I'm in now is Unpacking international student information literacy: Recommendations for the design of intercultural teaching and learning opportunities, presented by Alison Hicks (University College London). The presentation is based on her doctoral research. Her dissertation is here. Using constructivist grounded theory and the theoretical frameworks of transition theory and practice theory she was exploring how information was made manifest by language learners and how information literacy helps students to mediate transition. The IL definition she adopted was Lloyd's, that IL is "a way of knowing the many environments that constitute an individual's being in the world". Her definition of "Transition" was taken from Gale & Parker "Change navigated by learners in their movement within and through a context".
Hicks interviewed people from English-speaking countries, who were visiting a variety of countries (I think 14 countries were involved in all). She used photo elicitation, asking them to take photos that could be used as a stimulus for discussion in the interviews.
The first finding highlighted by Hicks was that of the risks faced by students: notably physical, financial, legal and academic risks (e.g. managing a tight budget, finding out what legal requirements they had to meet in the host country, being concerned whether they could improve their language to the standard expected.)
Hicks discovered that students mediated these risks through IL. She described a practice of "calibrating"; observing and engaging with local people to find out things about the environment and etiquette, checking, and noting (making notes, taking photographs etc.). There was also the practice of "repositioning", to insert themselves into the environment, to deal with things emotionally (e.g. taking time out, connecting with people back home), archiving material.
Finally Alison presented the model that emerged from the study (pictured) and proposed a theory of mitigating risk which "states that the pressures of residence abroad catalyse the enactment of information literacy practices, which subsequently mediate language-student transition from acting like to becoming a language learner within a new setting"
After a pause for us to discuss her ideas and provide some of our thoughts, Hicks went on to present her recommendations. Firstly, framing things in terms of "transition", focusing on scaffolding the transition process and the idea of the student recapturing their equilibrium. This means investigating what transition means and the place of IL and the library within that. Hicks pointed out that transition can be a positive, generative experience, and one should not just see it as negative.
The 2nd recommendation was about "recognising that IL centres on negotiation rather than assimilation". Part of this is acknowleging the expertise and knowledge that the students already have. The 3rd recommendation was "design for sociality, connections and interaction". This included thinking about embodied information that can be valuable when learning about a culture.
This all had implcations for IL teaching, avoiding thinking about international students as the problem. Hicks identified that it was valuable to draw on empirical research to inform IL education, rather than relying entirely on professional models and standards.
Alison gave her website url: http://alisonhicks.weebly.com
Posted by Sheila Webber at 14:26