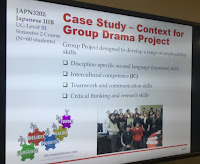 My last liveblog today from the Research-Based Education conference at the University of Adelaide, Australia.
Harrison Lees and Dalestair Kidd talked about employing students to co-create learning material with Echo360, in modules that they had already taken. The student creators gave feedback that they had benefited with having the additional interaction with lecturers, and it helped them understand the subject more. The students who were using the student-co-created Echo360 activities gave mainly positive feedback, appreciating actitivities like quizzes. Echo360 has inbuilt note taking software, and one message was to make students aware of this, also to introduce the activities early on so they get used to using them. This was part of the University of Adelaide's Students as Partners initiative, and students get paid: this was seen as important, so students did not feel exploited. The student presenters also urged academics to be receptive to students' new ideas and to follow up with the student.
Kayoko Enomoto and Richard Warner (University of Adelaide) presented on Living the language: an innovative group drama project for students to step into the shoes of others. They were talking about a group project designed to develop employability skills in an undergraduate module in a Japanese programme. They were aiming to develop discipline specific skills, intercultural competence, teamwork/ communication skills and critical thinking and research skills. Intercultural competence is seen as important to enrich linguistuc competence (although it was highlighted that the concept of IC is the subject of debate).The speakers identified the difficulty of "selling" group work to students (something that has come up in most of the sessions at the conference so far!). A four stage loop model of intercultural competence by Deardorff was used.
In this project, groups of 4-5 students (in a class of about 60, with different disciplinary backgrounds) had to write a drama scenario in Japanese, which focused on a selected socio-cultural issue. A list of issues was given, from which the students chose; examples are shut-ins, maternity harassment (forcing women to resign when they get pregnant), the ageing population. The students have to do searches for evidence for their dramas, using search skills and critical thinking. The drama format enables the "shoes of others" element.
Students are not necessarily interested in socio-cultural issues when they start the module (they might just want to learn the language). Bringing in Japanese exchange students was one strategy to motivate interest, and video presentations from previous cohorts were shown. The groups had to draw up a group contract, and do a storyboard (using a template), and these counted towards the final mark, as did the final drama (which they had to perform). There was an element of peer assessment. Student feedback indicated that the exercise did contribute to the development the tutors wanted, and also that some quieter students performed enthusiastically in the drama element.
Finally, Brendan Bentley (University of Adelaide) talked about Researchers in residence. This is an initiative in a Masters of Teaching degree. The student, who has to produce a 20,000 word dissertation, is placed with an employer (school) to undertake context-relevant research. This may be the same school as where the student does a placement, but not always. Bentley stressed the importance of having a programme coordinator who can main good connections with employers and understands the needs of the schools and thus the research questions that need to be pursued. It was also important to understand the skills that the preservice teachers do (and do not) have. The data that is analysed by students in usually secondary data. An executive summary of the research is given to the host school, and findings are presented at a conference of fellow students and other stakeholders.