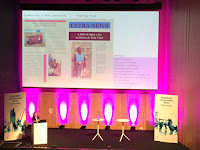 More liveblogging from the Global MIL Week feature conference. Mona Guath (Uppsala University) reported on research about Assessing incidence of credible and less credible news. She began by talking about a large-scale experiment The News Evaluator http://nyhetsvarderaren.se/in-english/. 13-19 year olds took the first piece of news in their feed and evaluate it. Then this choice was stored in a database. A lot of these items were hard and credible news, often behind paywalls: a caveat is that perhaps the young people were selecting items they thought the researchers wanted. Next there was a project of 500 young people, who were asked to rate the importance of consuming credible news, also gave demographic information about themselves, and the took a test covering aspects of media and information literacy. There were correlations between thinking you were good at searching and NOT performing well in the test, and in doing well in the test and: thinking credible information was important; education; studying particular disciplines. Guath also talked about some other strategies associated with ability to detect biased information: e.g. curiosity as a personality trait.
Estrella Luna Munoz (University of Lisbon, see photo) talked about Strategies/Competencies and social integration in vulnerable sectors: community empowerment with mediators. She started by talking about the issue of exclusion from involvement with technology and society. There were still issues of hate speech, intolerance, othering etc. which meant that freedom of expression and dialogue were vital. Thus there was a need to develop tools and strategies to help mediators and teachers in/of vulnerable communities: in terms of technology, you had to work what was available in communities. They went into communities to talk about the news that is spread about that community and to develop an alternative form of news about that community. The community was involved in making news, interviews, photos etc. but just with the technology that people already had. This reflected the tools they had and the topics important to the community. This encouraged debate in the community as well as promoting a different idea of the community. From this they have recommended competencies that people can develop in the community through these activities, and in order to support these activities.
Viktorya Muradyan (Iaelyon School of Management) talked about the Velvet Revolution in Armenia. She talked about the transparent 24/7 non-raditional news coverage that supported and created change. However there is also hate speech and shaming, nutured by media - with a post-revolutionary crisis. Muradyan identified a change in mindset that is necessary for change to happen and be maintained. In good hands, the media can connect people and bring change, but the negative side has to be combatted.
Anna Belkina (Deputy Editor in Chief, RT) talked about the need to enable different voices and perspectives to be heard, rather than excluding journalists and those giving alternative perspectives. She also identified the problem of framing "view you don't like" as fake news or misinformation. Belkina stressed that this was problematic for critial thinking and MIL. She called for genuine information diversity instead of supression of alternative and uncomfortable views.
Finally Muhammad Furqan Rao talked about hate speech a case study of 2018 general elections in Pakistan. He identified the role of social media wiuth hate speech, and the way in which social media was used in Pakistani politics. Politicians had been using social media actively. In terms of the national legislation and constitution: there was freedom of expression, a code of conduct for political conduact and also regulation to do with use of social media. For this research, they carried out 24 elite interviews (e.g. with journalists, politicians etc.) They also analysed Twitter and Facebook profiles/streams of key political figures and parties. The latter analysis showed that politicians were calling each other corrupt, thieves etc. and using various other aspects of hate speech, including incitement and targetting people's personal lives (e.g. accusations to do with people's sex lives). Rao identified by the need for education in MIL and for more  regulation of the poilitical hate speech.
Posted by Sheila Webber at 16:34