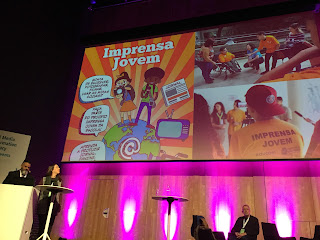 I will do a few more posts to catch up with the Global Media and Information Literacy feature conference, although I'm now back in the UK. The session that I chaired on Wednesday had five talks with varied perspectives. One focused on MIL education in São Paulo schools, one on critical gaming literacy, one on Digital and Media Literacy for faculty in Thailand, one on critical approaches to news, and I will select some key points on those below. The fifth one was a talk from me and Bill Johnston about transformational learning for adults, and I will blog that separately.
Firstly, Carlos Alberto Lima and Maria Celia Rehder (Educommunication Nucleus, Brazil) talked about 18 years of media education in São Paulo schools, and the progress over time. They started by sketching out some statistics about the city: 12 million inhabitants and 3,834 schools with over 1 million students. There is a municipal law which identifies that the population should learn about media literacy. Study of the UN Strategic Development Goals (SDGs) is integrated into the primary curriculum and this is done with and through Media and Information Literacy (MIL) activities. The students have various media projects, produce pictures, videos and podcasts etc. 470 schools have a “youth press”. Teachers also get taught about MIL, with 25,000 trained in 18 years and 4000 in 2019. There was a recent survey that showed that 40% of the students enjoyed participating in the communication/ production activities. 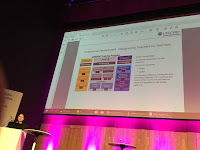 Jomkwan Polparsi (University of the Thai Chamber of Commerce) gave details of the programme to develop university faculty’s use of Technology Enhanced Learning, incorporating MIL elements and encouraging the faculty members to reflect on their approach to learning design. Stage 2 of the project had “champions” from the faculty redesigning the course themselves. This redesigned course has three levels: exploration of core technical tools, “productivity” (addressing learning design and management of the TEL tools) and then “community”, with the emphasis on sharing examples and experience. The goal was developing the learning ecosystem (which includes the element of “pain” as well). The university runs MOOCs (ThaiMOOC), has had a project with primary schools, and is planning educational programmes for older people. They are working closely with Apple, which they were open about and had found pragmatically useful.
Jonas Linderoth (University of Skovde, Sweden) gave a talk focusing on the concept of critical gaming literacy. He identified the pervasiveness of computer gaming, but also the way in which it is often not treated seriously (despite the huge value of the gaming market) or is demonised. You can find out more about his work here, here and here.

Finally, Yves Collard (Media Animation, Belgium) started by identifying that the message from teachers was now not so much that they wanted young people to be critical with the media, but rather that the young people were be hypercritical: over-doubtful of journalists and the media, and likely to succumb to conspiracy theories. In fact he identified that this has become a subculture of young people who felt there was “no truth”. In order to engage with them it was important to understand them and not to just look down on them. He identified five approaches to challenging a “no truth, conspiracy theory approach to information, each of which had both opportunities and limitations. This was an interesting framework that I wasn’t able to take full notes on (because of my responsibilities chairing the session) so I hope to follow up n it. However I did take photos of some of his slides. Four of the five frames were: empiricism (with a focus on facts and truth); de-constructivism (which focuses on getting people to deconstruct the media to look at elements such as language, producers and representations); ideology (concentrating on the broader political context of the media and its producers, and the influencing factors); and the collective approach, looking at why people share media (I took a picture of a slide with the remaining element but I’m afraid it turned out too blurred to read, though from someone else’s notes the heading was “cognition”). I think the idea was to generate questions which meant that people thought about an item from all five perspectives, so that you overcome the limitations of using only one of these frames. For example the empirical frame (which I think is the one most commonly encountered in library tutorials) is not enough if someone has a strongly held opinion which is not going to be changed by advocating fact checking, but someone might start to question their opinion if they use some of these other approaches to interrogate a media item. His site http://www.theoriesducomplot.be is also interesting (French language).
Photos by Sheila Webber
Posted by Sheila Webber at 17:01