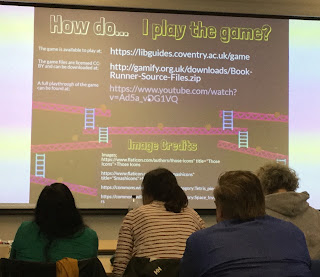 This is Sheila, and a session about a serious game is my next one at the LILAC Conference. Darren Flynn, Becky Collins (presenters) and Samantha Clarke authored "It"s dangerous to go alone! Take this"; Developing a role-playing video game for library induction. This focuses on a game developed by Coventry University’s Lanchester Library and their Disruptive Media Learning Lab. The Bookrunner game can be played online at https://goo.gl/ccmYN5. The underlying plot is that the library system has become sentient and has locked down the library, and you have to liberate the librarians and get to leave the library.
The presenters talkied about how and why it was created as an induction support (reasons included a more extended induction period, the opportunity for collaboration). A video game is scaleable (which a board game isn't) and doesn't involve a lot of input (unlike, e.g., an escape room). The game can be delivered with one librarian facilitating. Since it gets integrated into face to face teaching it was important it was time delimited.
They thought about the pedagogy underpinning it. Kolb (experiential learning), Arnab et al (that the gameplay needs to match up with the learning; so the learner and game mechanics align), and Clarke et al (matching learning outcomes with game outcomes) were drawn on.
The game engine was RPG Maker. The librarians listed the learning outcomes they wanted (having to cut down their original list), and then develop an outcome in the game to match each one. There also was an overarching storyline, to drive engagement and encourage people to play it all the way through. The writing was collaborative. The library is based closely on the actual library layout (to familiarise students with the physical library). Inspiring the story were previous scifi (e.g. 2001 a space odyssey), dealing with library anxiety, data scandals and also use of mini-quests.
The game was used in a 2 hour induction session with business school students. They played it for about an hour, there were questions, and then there was a more traditional introduction to business databases. Students could also use the game independently via a LibGuide link.
There was user testing, they looked at usage stats, and they did pre and post tests (during the taught sessions), with both quantitative and qualitative elements. In terms of usage stats, the largest use was by people following a link on a Libguide (although they do not have information on how far people progressed). In terms of the surveys: there was a notable post-test increase in confidence in finding the subject librarians' office (which has been an issue), and also an increase in confience in finding subject-specific sources and locating physical books and e-books.
The qualitative responses were primarily positive, and the game seems to be memorable. The presenters noted that some students "got" the sci-fi related jokes and some didn't, but it didn't seem a barrier if they didn't.
They are currently getting together the evaluation and will publish the findings. One learning point was not to underestimate how long it took to play the game; secondly, the more game testing the better; thirdly, to manage expectations (e.g. not assume students will be excited by the game) - they explain that this is an alternative to talk-and-chalk. In terms of future development: they want to do voiceovers; they are looking at other games to develop using RPG Maker (it needs to be reusable and can be used by a lot of students, to be worth the time/effort). They are considering developing a game for referencing, or literature searching.
All the game files can be downloaded http://gamify.org.uk/downloads/Bppk-Runner-Source-Files.zip
Posted by Sheila Webber at 15:47