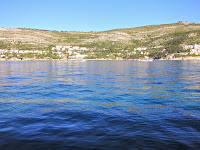 I found some notes on a couple of presentations I attended at the European Conference on Information Literacy last week which I hadn’t blogged. One was on a book review website for Serbian primary school children, and the other on assessing photographic work.

Sharpening of Little Quill Pen: Research on MIL in primary schools by Slađana Galuška (Primary school „Milorad Mića Marković“, Mala Ivanča, Belgrade, Serbia, Anđelka Tančić-Radosavljević (Primary school „Ratko Mitrović“, Belgrade, Serbia) and Gordana Ljubanović (National Library of Montenegro). The authors described an initiative from the Association of School Librarians of Serbia which aimed to improve pupils Media and Information Literacy (MIL). The aim was to encourage the young children’s creativity and critical thinking by getting them to contribute reviews, posters, descriptive/promotional videos, author interviews, create plays etc. about books they had read, on a specially created website. The presenters showed some creative examples from the website. This initiative had been running for four years, with 500 students from 20 different primary schools involved in the 4th year. The presenters had carried out two evaluation surveys with mostly multiple choice questions, one for students (299 respondents) and one for teachers and school librarians (94 respondents). One finding was that the teachers were not using the web very creatively and had limited conceptions of MIL. The teachers underutilized librarians and librarians felt they did not have influence: the relationship between teachers and librarians was characterised as “co-operation, co-ordination, but not collaboration”.

Development of Visual Skills: Digital Photography as a Tool for Research and Teaching in Architectural Education by Mayra Jiménez-Montano and Laurie Ortiz-Rivera (University of Puerto Rico). This presentation described an initative where they had developed a rubric for assessing a photographic sequence. Architectural students had to take 5 photographs at a place of their choice in the city, that captured that place’s function as an architectural space. The four headings on the rubric used for marking were: General Image, Cinema Conventions in Photography, Visual Narratives, and Design Process.
Photo by Sheila Webber: blue and gold sea, looking out from Lokrum island, Croatia, October 2014
Posted by Sheila Webber at 21:36