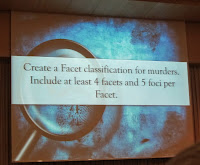 Next item I'll blog from the European Conference on Information Literacy, held in Dubrovnik is From Know That to How From Know That to How From Know That – Providing New Learning Strategies for Information Literacy Instruction, authored by Kathrin Knautz, Anja Wintermeyer, Lisa Orszullok and Simone Soubusta (Heinrich-Heine-University). They are using a computer role play game, Legend of Zyren, as part of a credit bearing course on knowledge representation. This approach is also carried outside the game. She said that the students reacted much more positively to group work when it became "forming a guild to compete against other guilds" - she gave an example of having to explain a technical term through drawing or mime. She also gave an example from the computer game - a murder mystery quest. In order to solve it you have to create a faceted classification (e.g. for the murder weapon). There was an evaluation, with a positive response. At the end of the course no one thought it uninteresting, no one thought it was useless and grades improved. A nice touch was that they had used students from another class who worked on developing the game, for credits!
Photo by Sheila Webber
Posted by Sheila Webber at 11:26