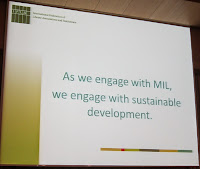 Next from the European Conference on Information Literacy, held in Dubrovnik was Maria Carme Torras: Libraries Furthering Development: Media and Information Literacy in the Post-2015 Development Framework. Torras introduced the UN post-2015 development framework and pointed out that there were multiple processes feeding into it, with the new framework to be implemented on 1 January 2016. IFLA's goal for new framework is that it should recognise the role of access to information as a fundamental element supporting development, and the role of libraries and information underpinning development. Therefore IFLA has been working with allies in the civil society and development communities and UN states, and has participated in relevant meetings. It also has developed and advocacy toolkit for the post 2015 framework (launced a few weeks ago). This toolkit can be found here: http://www.ifla.org/libraries-development/toolkit (quoting the website: "IFLA has launched this toolkit to support library institutions and associations and other civil society organisations to advocate for this position. The toolkit provides background on the issues and practical advice on how to set up meetings with government representatives. Template letters, talking points and examples of how libraries help meet development goals are included.") Torras also mentioned the Lyon Declaration.
Torras proceeded to talk about the concept of Media and Information Literacy (as developed and sponsored by UNESCO), and quoted Frau-Meigs as identifying "Illectronism" (not being able to engage effectively with technology as part of information life) as something that could be addressed by Media and Information Literacy.
The IFLA Trend report posed questions which are relevant both to information literacy and to the proposed UN post-2015 development framework. I have blogged about this report and the website is here http://trends.ifla.org/
Torras identified that building capacity and raising awareness are important. Frau-Meigs (who is a prominent figure in Media Literacy research) has identified a need to "review and retool" media and information literacy education (e.g. integrating into non-formal learning contexts). Torras also mentioned the role in empowering the less privileged and helping them encountering new challenges. As examples drawn from current news stories, Torras mentioned the "right to be forgotten" on search engines, and the issue of providing instructions for your digital footprint when you die (the headline there was "30 million facebook users are dead"! Torras also identified ethical concerns with new developments like Google glasses (talking about her children plotting to use them to secretly record their classmates - of course they got a lesson in media and information literacy!). She finished by raising even more profound issues of neorological, biological and technical technologies combining to transform humans, and the role of librarians and media and information literacy in identifying and tackling the ethical and socio-cultural issues associated with this.
Posted by Sheila Webber at 11:43