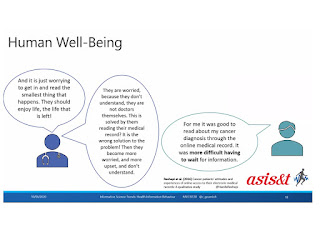 Yesterday (10 June) was the third and last day of the online conference Information Science Trends: Health Information Behavior, organised by the European Chapter of ASIS&T. As I was presenting I didn't do any liveblogging, but here are some notes on the other three talks that day (the slides of the talk given by me and Dr Pamela McKinney are here.)
The keynote was from Christiane Grünloh on “My Work Tool” versus “My Body, My Data”: Conflicting stakeholder perspectives on digital data access. She started by talking about changes in health-related technology and how that has affected the citizen and the interactions between patient and healthcare practitioner. There have also been changes in the way patients are involved in decision making, making them more equal partners, each partner bringing their own expertise. She mentioned the advocacy for epatients or Dana Lewis, for example.
Grünloh went on to talk about online health records, and specifically the national system in Sweden, which currently has about 3 million people registered. This was the focus for the research she was reporting. The introduction of this system was controversial, in particular with some physicians opposing, although some though it was democratising. Their research was looking into what the concerns of the doctors were, and the perceptions of patients after implementation of ehealth records - revealing contrasting views about what the records were for and who the records belonged to.
The physicians saw the patient records as tools important for their work: they were concerned e.g. about increased workload, patients monitoring doctors' behaviour in viewing records. The patients, on the other hand, were mostly positive about having access, for example feeling that they could communicate better with doctors, and access to records made it easier to follow up things they did not understand.
The researchers explored the findings further in terms of values in design. Considering "ownership and property" the doctors saw the record as their property and their tool to do their work, whereas the patients saw it as their property since it is about them. As regards "Autonomy" the doctors felt they should have control over their work, so they could make the necessary decisions and keep records in a way that made sense to them (rather than writing to be understood by patients). However patients could have the perspective of "nothing about me without me".
The patients' well-being was the doctors' chief preoccupation and they were concerned that this might be compromised by free access to your record: for example that patients might be worried by information without being able to sk immediately for clarification. Finally, there is "accountability and transparency, and privacy" with is associated with issues of trust, with doctors feeling that they will be trusted less and more checked-up-on.
The different assumptions and values of different stakeholders can hinder effective dialogue about these issues. The final message was "it's complicated"! 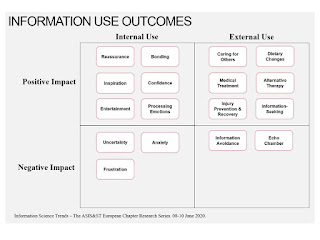 Following my and Pam's presentation, Paulina Bressel talked about #Recovery of Eating Disorders on Social Media - the extended abstract of her talk is here. Finally the third presentation was Health Information Use During Pregnancy from Carolanne Mahony (presenter), Ciara Heavin and David Sammon (all from University College Cork, Ireland). Using Tom Wilson's information behaviour model, they identified the "information processing and use" part of that model as being under researched and the part they wanted to focus on. They rationale for focusing on expectant mothers was to do with this being an important life event, and literature showing e.g. that expectant mothers combined information when making decisions.
Overall they did a longitudinal study over 18 months, but the results reported here related to the intervews before the child was born. There were 12 interviewees, in which the researchers asked the participants to identify information seeking incidents and tell the story of each. The researchers did thematic analysis, inductive and deductive coding, and the participants were given the analysis to check themselves. The researchers divided the themes into positive and negative impacts, and internal or external use. For example one participant talked about being given a lot of books, and then being overwhelmed and avoiding books altogether (so that was Negative external/behavioural); another was someone looking up physical symptoms online and getting reassurance (so that was Positive/internal).
Big thanks to those organising and moderating the conference, which was really well run and engaging! The team consisted of Aylin Ilhan, Crystal Fulton, Noora Hirvonen, Kaja J. Fietkiewicz, Isabelle Dorsch, Fabian Odoni and Tamara Heck of the ASIS&T European Chapter.
Posted by Sheila Webber at 13:22