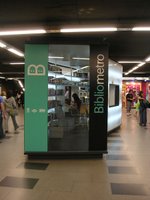 As I said below, I was away on holiday in Spain for a few days (and thanks to Stuart for posting a couple of posts I'd "prepared earlier" as well as his own, while I was away). Coincidentally there is a Spanish flavour to some of the entries at the moment. Via the FORMIST blog (see right) I learnt about a recent meeting in Toledo, Spain in February: presentations from this have been put on the web (all in Spanish, covering various aspects of information literacy). The conference website is at http://travesia.mcu.es/S_ALFIN/index.html

Photo by Sheila Webber: The "Biblio Metro" public library inside the Madrid (Spain) metro (underground). It has 2 library assistants inside and people were borrowing books as I watched last week.
Posted by Sheila Webber at 23:25

Email ThisBlogThis!Share to TwitterShare to FacebookShare to Pinterest
Labels: Europe