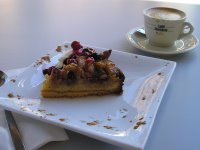 Searching Google blogs for other postings on the ANZIIL symposium (which I really will get round to posting about shortly, for the moment I am glorying in being back with unfettered access to the web) I found a number of other interesting blogs. For example, there is http://librariesinteract.info/ "Blog central for libraries in Australia" which has a list of Australian librarian's blogs, and also, for example a blog specifically focusing on the ALIA Click 06 conference which takes place in Perth, Australia, in September 2006. This blog is Let's blog Click06 [Added on 20 July: it's been renamed blog the conf] The ALIA conference itself has a number of interesting sessions e.g. Towards ‘applied’ information literacy, Innovation in a Podshell: bringing information literacy into the world of podcasting, and Librarians as Learning Advocates.
Also I added a comment to the Click 06 blog in which I mentioned the most-blogged conference I know, namely Computers In Libraries: I envisage presenting there as being a rather daunting experience in which you can see delegates blogging away at their keyboards critiquing your talk as you speak.