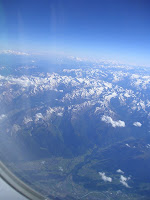 Still at the i3 conference in Aberdeen, I am listening to a keynote from David Snowden entitled Complexity, coherence, constraint cognition and context. He's intending to put the slides up as a podcast here. His theme is "Naturalising sense-making" (making sense of the world so we can act in it). He positioned himself as nearer Dervin's interpretation of sense-making than Weick's. He challenges "hard" systems thinking, which is interested in relationships rather than rigid categorisation. Thus for him a system is "any network that has coherence" which "may be fuzzy, it may or may or may not have a purpose". An agent "is anything whch acts within the system" (may be a person, an idea etc.) Thus he identifies 3 types of system: ordered (agents constrained); chaotic (agents all over the place); complex (interaction between the system and the agents).
I'll put in here, that in terms of, for example, planning for collaboration to education for information literacy, I would say that sometimes people talk about universities as if they were ordered (which is true only up to a point - but not necessarily in terms of nitty gritty curriculum development), or chaotic (with academics as erractic, but possible of being pinned down through individual study), but rather they should be treated as (at the curriculum development level) complex. At least, in some ways it may be most productive to treat the situation as complex, since then you would be looking at the whole situation, the "agents" and their academic context, and you would be thinking it as a situation that needs ongoing management and attention.
At the moment Snowden is talking about setting "flexible negotiable boundaries" in complex systems. You then set "attractors" (e.g. a video or game in terms of his actual example, a childen's party: in the curriculum this might be a particular educational or research activity perhaps), monitor and try different "attractors" and try and manage the system more organically. However he is also emphasising the need for constraints in systems, so his ideal system seems to be a "semi constrained" one.
Snowden has moved on to talk about the Cynefin framework (he's also referred to an article in the Harvard Business Review, the title of which is a "Leader's framework for decision making" (published November 2007). I don't want to jot down everything Snowden is saying, so I will skip over some of the next points (since I haven't processed them properly myself yet), but he has moved on now to the issue of distributed cognition (i.e. getting decision making from a wide number of people rather than centralised - this also implies distribution of other things such as raw information). He distinguishing this from just taking the pulse of "the crowd" (I think), looking rather to an informed or expert crowd. He has moved on to talk about the issue of only perceiving the patterns and data that you expect or are familiar: this can prevent us seeing new and unexpected things. 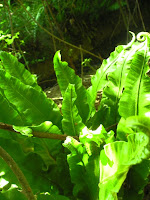 He has given a sort of slogan "Live with the way humans are" (rather than trying to force them into systems). Although there is certainly an educational element in information literacy (to go back to my own reflections), I think that that is a good way to start the approach - both in terms of identifying effective information literacy strategies that suit people's different information behaviours (so, information browsers as well as seekers) and in planning a pedagogically effective approach. He is also arguing against focus on "best practice" because you learn from your own mistakes, and also best practice in one context today, may not be best practice somewhere else tomorrow (or even today). I agree with that too.
He's finishing by talking about projects he's working on where people are enabled to tell their own stories, and doing their own tagging etc. of their stories and images. You may find relevant links at his website at http://www.cognitive-edge.com/index.php
Photos by Sheila Webber: view from plane to Athens, June 2009 & Hellingly woods, May 2009
Posted by Sheila Webber at 10:38

Email ThisBlogThis!Share to TwitterShare to FacebookShare to Pinterest
Labels: i3, i32009, Information Behaviour, Pedagogy, research