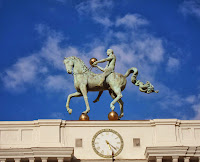 There are two online meetings, on April 4 11am Pacific time/2pm US Eastern time/7pm UK time or 17 April at 8am Pacific time/ 11am Eastern time/ 4pm UK time to discuss the draft ACRL Information Literacy revised framework. Register to attend one of these free events by noon the day prior, as login details will be emailed the afternoon prior to forum date. Registration is limited to 500 slots for each forum. Links to the recorded forums will be posted afterwards on the task force website. You register here: http://www.signupgenius.com/go/5080C44ABAC2F4-online1
The working group encourage feedback on both parts of the initial draft (at the moment just the first part is there) by 5pm on Tuesday, April 15, 2014, via an online form. You can find the draft at http://acrl.ala.org/ilstandards/?page_id=133
"A second, revised draft of the Framework, incorporating comments received on the initial draft and including additional elements, will be released in June 2014, followed by hearings at the 2014 ALA Annual Conference in Las Vegas and online."
Photo by Sheila Webber: statue "El instante preciso", Granada, March 2014. This statue has a Flickr group
Posted by Sheila Webber at 20:46