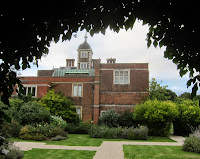 There is a call for nominations for the Miriam Dudley Instruction Librarian Award. There is a US $1000 award, presented at the American Library Association Conference. The deadline for nominations is December 5 2014. "This award recognizes an individual librarian who has made an especially significant contribution to the advancement of instruction in a college or research library environment." It does not (as far as I can see) say that the nominee has to be North American, though it looks like all the recipients so far have been. Further details are given on the website at http://www.ala.org/acrl/awards/achievementawards/miriamdudley.
There is also a Distance Learning Librarian award with the same closure date for nominations (and a slightly higher prize of $1200!) http://www.ala.org/acrl/awards/achievementawards/dlsaward
Photo by Sheila Webber: Charlton House, September 2014
Posted by Sheila Webber at 20:39

Email ThisBlogThis!Share to TwitterShare to FacebookShare to Pinterest
Labels: Awards