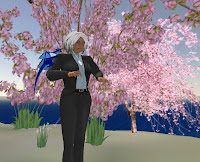 Two more discussions are taking place in Second Life (SL), the virtual world: you will need a SL avatar to attend. The first , Pitfalls for librarians in Second Life is on Thursday 17 April 2008, 12 noon SL time (8pm UK time), on Infolit iSchool (45, 202, 22). Discussion is led by Pam Dowsett (Pam Ribble in SL, pictured), who outlines some pitfalls for librarians setting up services in SL - and tips on how to avoid them! Pam has extensive experience as a SL mentor and working on the SL reference desk.

On Thursday 24th April, 12 noon SL time on Infolit iSchool (101, 211, 22) The role of libraries in reaching everyday SL users. Discussion is led by Margaret Ostrander (Testy Outlander in SL) who has spent the last two months conducting research about the information seeking habits of everyday Second Life (SL) users. Research findings showed that none of the users interviewed had used SL libraries, and nearly all were unaware of their existence. What should the role of the SL library or librarian be beyond the borders of places like Info Island? Why are so many SL users unaware of SL libraries? What is your institution doing to provide outreach into the vast corners of this rich virtual universe? How can the everyday information seeking behaviors of SL residents inform library services?
Posted by Sheila Webber at 06:24

Email ThisBlogThis!Share to TwitterShare to FacebookShare to Pinterest
Labels: events