IFLA #wlic2012 Internet censorship in context: the shape of things to come 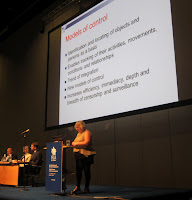 Another post from the IFLA World Library and Information Conference in Helsinki, Finland. Päivikki Karhula (University of Tampere, School of Information Sciences, Tampere, Finland) spoke about Internet censorship in context: the shape of things to come. Again this was livestreamed, so should be viewed afterwards on http://express.ifla.org/videos

Karhula traced the origins of the open internet and the growing practice of control, through legislation and filtering. From about 2005-2010 the control and surveillance became more nuanced and pervasive. She felt that the latest issue was the militerisation of cyberspace.
About 20 countries are reckoned to practice pervasive levels of censorship, including very large countries like China. There are different actors in censorship and control, public and private, and an increasing range at different points in the process. Karhula gave some specific examples involving journalists and artists. She identified some worrying trends, with increased ability to identify where people were, and when they were there, integrated with other information giving new mass surveillance. She felt that digital civil rights therefore needed to be redefined. We need protective technologies (against data sharing and tracking), legislation to protect rights, and activism and lobbying to highlight these issues.
Some questions afterwards were raised about the place of libraries. The panel chair pointed to the work of FAIFE itself: notably the IFLA Internet manifesto. Obviously there are implications for information literacy here (though I'm afraid I didn't raise them - too busy blogging!), making people aware of the issues and indeed helping people understand how they can know whether such controls are being practised in the first place.