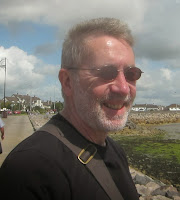 At the end of the European Conference on Information Literacy, held in Dubrovnik, Bill Johnston provided a reflection on the whole conference. He started by thanking the organisers for a successful conference. He also commended the speakers for keeping to the subjects forecast by their abstracts!
He noted that major issues had been raised by speakers, including societal issues such as inequality. He gave as an example a paper which talked about information literacy initiatives in South African townships. He felt that there was further scope for more focus on information as an economic resource and activity and as an element in political life. Bill identified information as a "natural human resource".
He noted that there were studies in the conference examining a variety of contexts, and in and out of formal education, and in many different countries. He felt it would also be useful to focus on "big units" such as political processes in action (an example recently was information activities to do with the Scottish Referendum), such as health (which is a big impact area) and such as the "green" agenda (sustainability, climate change).
Finally Bill felt there was a need to balance the power of big institutions to manage things (including information) and importance of human rights: this seemed very much an area that information literacy experts should have something to say about. In terms of the papers presented, Bill thought it would be valuable to triangulate some of the papers (best practice, theory etc.) as part of reflection on what had been revealed at the conference.
At a broader level, he felt it would be useful to have a time frame and target for greater awareness of information literacy, and also plan for the time when information literacy is better recognised.
Following Bill's summing-up there were various anouncements including the venue for next year's conference. ECIL 2015 will be held in Talinn, Estonia, 19-22 October 2015 http://ecil2015.ilconf.org/. The deadline for abstracts is next March so you can start planning now!
Posted by Sheila Webber at 15:18