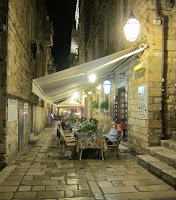 A shaky start to my liveblogging from the European Conference on Information Literacy, held in Dubrovnik this morning. I was delivering a talk (with Bill Johnston, I will post about that later) at 9am, and I'm afraid I took a little break after that to boost myself with coffee. Therefore I missed the first part of the panel from Stephane Goldstein, Ralph Catts, Jane Secker and Geoff Walton on Transferability of information and data literacy beyond higher education and can't do it justice.
However, to report on the part I attended: one thing was that a new membership organisation was being launched InformALL http://informall.org.uk, which has grown out of the Research Information and Digital Literacies Coalition.
Questions were flagged up for discussion. The first one was looking at the concept of Information and Data Literacy in the workplace, and how it might be explained to stakeholders. Responses included highlighting the value of case studies, creating evidence which show how IDL affected profits, adopting different strategies with Small and Medium Sized Enterprises and big businesses, talking to trade unions, skills agencies, and looking at existing portals (one in healthcare was mentioned).
In terms of looking specifically at "the juncture between higher education and employment", as well as the stakeholders mentioned above, careers services, course placements, placement agencies and associations that were concerned with professional development were mentioned. I also thought of parents (thinking about the successful programmes that I found out about last year, run by the Singapore National Library Board) who unfortunately nowadays may find their graduated students returning to them and might be motivated to helping their children to become employable.
They finished by asking whether initiatives such as the one they propose, InformALL, could be a vehicle for further action.
Doing a quick google, I found a poster here which is on the same topic by these authors http://www.slideshare.net/infolit_group/goldstein-walton-poster
Photo by Sheila Webber: restaurant street, Dubrovnik, October 2014
Posted by Sheila Webber at 10:07