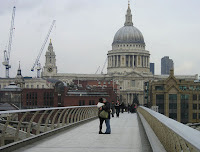 A research review has been published, which had the aims of establishing:
"whether or not, as a result of the digital transition and the vast range of information resources being digitally created, young people, the `Google"generation’, are searching for and researching content in new ways and whether this is likely to shape their future behaviour as mature researchers?
"whether or not new ways of researching content will prove to be any different from the ways that existing researchers and scholars carry out their work?
"to inform and stimulate discussion about the future of libraries in the internet era."
It was co-funded by JISC and the British Library. The JISC press release is here and it has been picked up by the press e.g. here. The latter story is probably also prompted by the fact that the Chief Executive of the British Library, Lynne Brindley, has just been made Dame Lynne Brindley (I worked for her for a while when I was at the BL....) This is the review:
University College London (UCL) CIBER group.(2008) Information behaviour of the researcher of the future. London: University College London. CIBER Briefing paper; 9. http://www.jisc.ac.uk/media/documents/
programmes/reppres/gg_final_keynote_11012008.pdf
Photo by Sheila Webber: London, December 2007.
Posted by Sheila Webber at 21:51