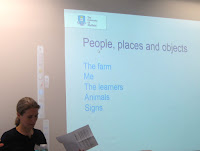 Next from the i3 conference was Jess Elmore on Information sharing in the ESOL (English for Speakers of Other Languages) classroom: a case study. This presented material from her PhD research, mainly focusing on methods and challenges. ESOL learners are learning English as a tool for their everyday life (not for tourism or as an academic subject), and they are also migrants (i.e. someone who is living in a different country). There are a million people across the UK who say they need to improve their English. Elmore related her research to that of ESOL and information (where there hasn't been much research from the information field); migrants and information (e.g. how people transfer their information practice; the importance of people and places); and information literacy and language learning (literature saying there is a link between the two, but mostly understaken in an academic context).
Elmore's focus is on information sharing (how it is mediated by people, places and objects): she is using Fisher's Information Grounds theory as a useful way to frame her research, and also drawing on practice theory.
Her research is sited in a Northern English city with a long history of migration into the city, and the research is focused on two ESOL classes, each a case study. The case study/class which was the focus of this presentation was a women-only class, in particular from Yemen and Pakistan. Elmore collected 35 hours of data, mainly observation, and she took an active part in the class. A central part of the activity were three trips to a city farm, a photography exhibition and a centre for the visually impaired.
Elmore discussed the challenges to the research: the power dynamics (and Elmore discussed the challenges of designing and implementing research that deals with that imbalance and does not "other" the participants). She talked about the duty of care to the partcipants, whilst also respecting their power over their own lives. Elmore was aware of how her research could be (mis)used, keeping at the back of her mind the question "What's the worst interpretation that the Daily Mail could make of this research"? Her inspirations here included bell hooks and Bev Skeggs.
Elmore gave examples of her data: observational notes, pictures, reflective diary and some transcribed recordings. She had hoped to do more analysis WITH her participants and she compiled a book with a story (pictures and a small about a text) which she took to her participants, but there was not much discussion from the participants. Her move from that was to concentrate on incidents of information sharing, and look at those episodes within the information grounds framework. She read out one of the episodes, and talked about how in the city farm they were visiting, Elmore herself, the learners, the animals and the signs were the people, places and objects (see the rather bad photo I took). Because they couldn't read the signs, the signs were less important than the animals, specifically chickens that the women knew a lot about and which were a link with their home countries. Elmore talked about spaces, and how people may be threatened and constrained by space. You could also say that there were information flows, and the visit might be said to be affecting the women's information literacy.
Discussion points were: critical stance to embodied information; understanding particular migrant experience; and, what arrangements constrain and enable information sharing?
Posted by Sheila Webber at 10:22