Internet Challenge at Oeiras a Ler 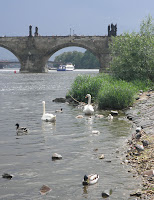 Here is my third post about the conference I spoke at in Lisbon, Oeiras a Ler. Antonio Navarro and Maria Jose Amandio talked about the Oieras Internet Challenge organised by Oeiras Municipal Library (Bibliotecas Municipais de Oeiras, organisers of the conference). They were addressing information literacy (which is Literacias de Informacao in Portuguese) and also their library wants to develop learning to learn abilities.
Their Internet Challenge is a yearly event, targeted at the young in particular. They want to improve ability to search the web, and motivate people with more entertaining activities to come to the public library. Any one can apply to be in the challenge. People are set questions and they have to find the answer quickly using the web, in teams of two people. It has several rounds (each round is harder than the last), all on the same day, so it is a marathon from 9am to midnight. It is a public event, like a TV game show, with friends and family encouraged to come along and support their team. Librarians create about 300 questions (quite a hard task, thinking of good questions). There are lots of pictures of the 2009 challenge “Game day” on their blog http://oeirasinternetchallenge.blogspot.com/
The numbers of applicants and of teams selected has increased every year: Year 1 (2006): 32 teams; Year 2: 56 teams; Year 3 (2008) 61; Year 4 (2009): 70 teams (with 119 applications). They are aiming for 98 teams this year. At the conference, we were given a live demonstration, using two volunteer teams from the audience. First, each team chose a topic (e.g. science) then questions from chosen themes were mixed up. A question was posed (e.g. what is “2 loaves” in Czech) on the big screen and it was the first team to answer got the point (if correct) or a point deducted (if incorrect). The whole thing seemed fun, and also very interesting in terms of how people where finding the answers (you could see what was happening on contestants screens too).
A similar kind of thing has been done by some universities in North America, see the Digital Literacy Contest website.
Photo by Sheila Webber: Swans under the Charles bridge, Prague, May 2010
Posted by Sheila Webber at 22:10