A Toolbox Approach to Researching, Understanding and Teaching for Information Literacy #ecil2016 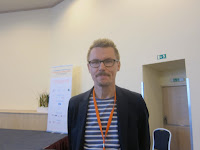 The third day of the European Conference on Information Literacy 2016, in Prague, Czech Republic, and it starts with an invited talk from Ola Pilerot A Toolbox Approach to Researching, Understanding and Teaching for Information Literacy. I'm liveblogging, so as usual apologies for any unwitting misrepresentations of what was said.
First of all he talked about the information literacy discourse: in a previous study he and his co-author had identified some gaps in the information literacy landscape. Pilerot felt that part of the problem was partitioners and researchers not "talking the same language" (e.g. practitioners not reading research, researchers ignoring common practical problems). Pilerot presented a table which identified the ways IL was presented in reports and practitioner texts, and on the ways in which it emerged from research literature. For example in professional practice it tended to be presented as a fixed set of generic skills, and in research as "situated, related to contexts". Arising from this he felt there needed to be a more nuanced discussion about the concept.
Pilerot felt that what he was going to say could also be applied to other literacies, and stressed that he also preferred to talk about "literacies" rather than "literacy". He felt it was fine also to use concepts which helped to spread the idea (for example "Media and Information Literacy" appealing more to politicians).
Pilerot noted that people often said that information literacy was a difficult concept to get over to ther people. Why was it elusive. Pilerot thought this was because it could be used in different ways - a word that meant different things when spoken by different people. Pilerot quoted Wittgenstein "The meaning of a word is its use in the language". The phrase IL was used by different types of people (i.e. not just librarfians) and they were likely mean different things.
Pilerot identified four ways of using information literacy. (1) As a label (for a field of professional practice) (2) As an empirical concept "something that can be observed through the study of what people do" (3) A theoretical concept "an analytical and theoretical tool" (4) as a political concept
Pilerot then explained his idea of a toolbox approach (for theorising information literacy). I think that this involved having more of a toolbox of questions (rather than skills) looking at the person/group in context e.g. "what is regarded as valuable knowledge in this context" - looking at situated practice. Pilerot drew on his own research study of a community of design scholars. In order to understand their information practice, these questions were important. For example, what genres did they engage with, that were important to their practice? What is their disciplinary world? What are the material objects used in, and shaping, their practice? There are may also be spaces and practices that are a tacit part of the community (the example was given of a PhD student who realised that going to the copy room and drinking coffee their was a ways of connecting and exchanging information).
Also I should mention that Pilerot felt that you could teach for information literacy, but not teach information literacy (something I disagree with, but a topic for fruitful discussion!)
Posted by Sheila Webber at 08:57