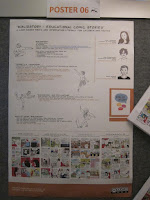 Apologies that my liveblogging fell in a heap at the end of the European Conference on Information Literacy 2016, in Prague. I was overtaken by duties chairing a long session yesterday, and a panel session today. I will catchup on some of this, in a few posts later.
However, here is a glimpse of the closing session. Stephane Goldstein presented a conference wrap-up, giving his impressions of the conference as rapporteur. He identified how we had learnt about information literacy "in all its guises". This year, there had been a focus on "the inclusive society", which had also led to there being more of a political aspect to the conference.
Goldstein felt that this strand of inclusion had arisen not just in the session dedicated to that theme, but also in a variety of presentations including, for example Tara Brabazon's keynote. Annemaree Lloyd had reminded us about the need and challenge of refugees integrating into new information landscapes. The notion of librarian neutrality had arisen a lot, as well as libraries/librarians engaging with social justice issues: this was addressed by speakers from many different parts of the world.
Goldstein identified that inclusive society means reaching out - and there were examples of librarians reaching out to make a difference. He felt that ECIL needed to open out to "players beyond academia and beyond the library world", to understand these other conceptions and practice of information literacy. This could include elected representives, civil society groups, healthcare parctioners, patient groups, trade unionists and managers. There could be e.g. a target of 10% participation from outside the library/academic world. 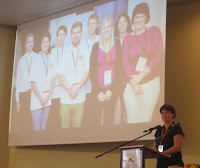 Following this the best poster award was made to Ewa Rozkosz, Zuzanna Wiorogorska and Agata Matras for their poster "Bibliostory: educational comic stories": a case-based Media and Information Literacy for children and youth. The first picture shows their poster, which I will blog about separately (with better pictures!).

The patrons, organisers and speakers were thanked by Hana Landova (pictured, showing the vonteer group), who herself had been tireless in organising the event. There had been 312 participants from 11 Asia-Pacific countries, 3 African, 4 North/South American countries and 32 different European countries.
The presentations will be on the website (depending on the permission from authors) and there are already some pictures of the conference.
Joumana Boustany was introduced as the chair of the Local Organising Committee for ECIL 2017, which will be held on 18-21 September 2017 in Saint-Malo in France!
Posted by Sheila Webber at 13:42