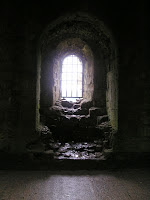 Thanks to Gerry McKiernan for alerting me to a report published in April by Forrester research which they did for MySpace. It was a market research survey carried out in the USA and asked about types of media/entertainment/communication devices used, how people felt about MySpace in particular. It being commissioned by MySpace you don't find out what people think specifically e.g. of Facebook ;-) The research included asking people to do collages representing their feelings about life with/without MySpace and asking them about brands (some people want companies like Nike to be their Friends .... hmm)
Fox Interactive (2007) Never ending friending: a journey into social networking.
http://blogs.forrester.com/
Never_Ending_Frieding_April_2007.pdf (there IS that typo in the web address - frieding - BTW)
Photo by Sheila Webber: Peveril Castle, Peak District, August 2007.
Posted by Sheila Webber at 23:22

Email ThisBlogThis!Share to TwitterShare to FacebookShare to Pinterest
Labels: web 2.0