IFLA's How to Spot Fake news poster, in many languages 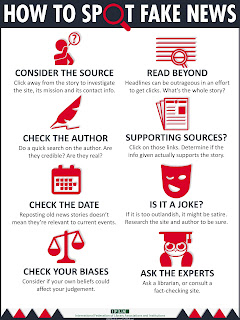 The poster that the International Federation Of Library Associations and Institutions (IFLA) produced on, How to spot fake news (shown here) is available in many languages, including Japanese, Latvian, Portuguese, Romanian, Swedish, Turkish and Ukrainian. In each case there is a jpg and a pdf, and IFLA are happy for people to use and share them. Go to http://www.ifla.org/publications/node/11174

This graphic is listed on the Ukrainian anti-fake-news website StopFake and was shown (yesterday) in a CNN feature on the Ukrainian site (though they didn't mention IFLA).
Posted by Sheila Webber at 20:48