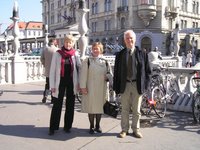 The other English-language speaker at the Slovenian information literacy confernce on October 19th was Kaisa Sinikara, Director University of Helsinki Information and Library Services , who was talking on "Information literacy between the theory and practice: experiences of the Finnish University Libraries". She talked about their strategy to bring information literacy to the attention of policy makers and to integrate it into curricula. They seem to have caught the attention of the Ministry for Education, since the Development Plan for Education and Research 2003-8 "stresses the importance of the willingness of libraries to contribute to the development of teaching and study methods, and thus, for their part, to ensure that university and polytechnic gruduates have good information literacy." (quoted from Kaisa's paper in the proceedings)

I mentioned a while ago the national Finnish university information literacy project, and they have some material available in English at http://www.helsinki.fi/infolukutaito/english/index.htm. This includes the Recommendation for universities for including IL competency in the new degree structures (the new degree stuctures are the 3 year (undergraduate) +2 year (Masters) structure that it part of the Bologna agreement on standardisation of higher education in Europe. This restructuring process is taking place in many European countries and had provided an opportunity to get information literacy into the curriculum. The Finnish recommendation targets 1st year, final year undergraduate and Masters, and makes some recommendations of what should be taught. It must be said that in the UK Bologna has not had so much impact as (except in Scotland) we already have 3 year UG degrees, and the likelihood of us moving to 2 year Masters (from the current one year) is practically nil, unless all universities were forced to do it.

The same basic information is available on the above site in Swedish, and there is obviously more information available in Finnish (use the tabs at the top of the site to change languages), including information about the seminar that takes place this Thursday 3 November Informaatiolukutaidon opintosuunnitelma: hankkeen päätösseminaari which includes a contribution from Christine Bruce.

It was interesting to read your comments about the Ljubljana seminar and to talk with you during the seminar.

I wrote my own report in the web journal of University of Helsinki libraries (in Finnish): http://www.helsinki.fi/kirjastot/verkkari/2006/07b/sinikara.html. Your blog was mentioned in this report and I hope that many Finnish collegues will look at it.

There were about 120 participants in the IL-seminar (3.11.) in Helsinki. I was telling greetings from the Slovenian seminar and about the IL-development in the UK when opening the seminar. The papers in Finnish included f.ex. a really interesting joint presentation by an academic and an information specialist (Lindström, Helminen) how they are closely collaborating in planning and teaching, a critical presentation of a researcher in IL (Halttunen) and a speech of a library director (Saarti) about the views of the Council of Finnish University Libraries concerning the future IL development.

The reception after the seminar was hosted by Vice-rector professor Hannele Niemi, who is a great promoter and supporter of Information Literacy.

With best wishes from Helsinki where the first snow has already fallen
Kaisa.Sinikara@helsinki.fi

Thank you, Kaisa, for your message! It is always tantilising when I see reports which I know must be interesting but my language skills are not good enough to understand them!