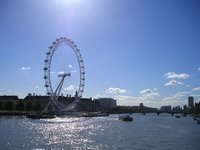 Indulging in nostalgia briefly, looking at the the Information Today blog covering the Online conference in London which ends today. I missed the very first Online (or IOLIM as it was then), but I attended all of them from the 2nd in December 1979 (I was of course very young then ;-) firstly on the British Library exhibition stands, then as speaker and/or UKOLUG Help Desk person and/or a member of the conference organising committee until a couple of years ago. Anyway, I couldn't go this year, so the blog has given me a flavour of what went on, as do a few other blogs like that of Phil Bradley who was involved in several sessions. (Added later) So nostalgic did I become that I rooted out the pdfs of Inform, the Institute of Information Scientists' newsletter I used to edit: here is the Jan 1997 issue where I did a long roundup of what was hot at Online 1996 including a very nice cartoon from Richard Wilson (the information scientist, not the actor).

Email ThisBlogThis!Share to TwitterShare to FacebookShare to Pinterest
Labels: whimsy