Kari Smith on assessment and equity, at #CKVI 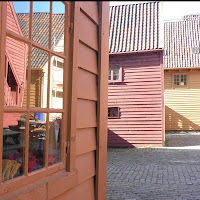 In the last formal session yesterday at the Creating Knowledge VI Conference being held in Bergen, Norway, 8-10 September, https://ck-vi.uib.no/, Kari Smith talked about Challenges posed by diversity: looking at language and assessment. (I found a pdf of a presentation that covered a number of the same points (and reported on her research) here.)
She defined her key concepts: Ethics "the study of what is morally wrong and what is not"; Equity "when everyone is treated fairly and equally." This obviously sounds simple, but is not simple to interpret and apply. For example, who decides what is morally wrong? Various cultures have different conceptions of morality. In terms of equity - it is finding the balance between what is fair and what is just (and there are not separate words for these two things in Norwegian, which is an interesting problem). In terms of equity, there is the key issue of whether we treat everyone the same, or take account of differences in deciding how to deal with people.
Kari went on to look at equity and assessment. There is internal fairness - assessing "the learner's performance in relation to the context in which it was produced". External justice involves "Similar treatment across a number of contexts and people". Discussion of ethics and equity in assessment has developed as there is "increased use of high stakes testing" (i.e. assessments where a lot hangs on teh results of the assessment), "demand for accountability" (from Governments, consumers etc.), with "Student achievements the main focus for educational policies" and "assumption that changes take place by means of standards" (e.g. that you improve educational quality by increasing standard levels).
She presented reasons why standards were nevertheless useful, e.g. as a basis for discussing professional knowledge and as a basis for assessment. She quoted Biesta (2009) as identifying three functions of education: qualification (which is externally validated); socialisation (which involves internalising societial norms) and subjectification ("independent of norms, enhances individual development": for this, too much attention to standards and norms is counter-productive). She contrasted instruction/training (which focuses on what is known, and is "completed" when a course it done) and education (which means asking new questions, which may not always have an answer). She also cited various authors who have challenged the value of predefined goals, high stakes testing, teaching to the test etc.
She emphasised that all that "can be measured is the concrete learning which the students choose to perform" (and students may not chose to perform to the highest level that they could).
In the final segment of her talk she drew on her research into studying in an additional language. Her participants were studying either in English or in Hebrew, which were not their first languages. The minuses of studying in a foriegn language included that students felt that their first language usage became poorer, it was time consuming to keep up with their studies and they could not read in depth (because they read slowly), there was loss of self-esteem and the students also felt a loss of identity.
Implications: There is not just one type of international student: different groups have different backgrounds and goals. For example, there are students choosing to study abroad full time, or immigrants to a country. Since they have different goals, they should not necessarily be treated in the same way. For example immigrant students, who want full integration into their new country's culture, need strong support nets: internal fairness might consist in extra tutorial support and perhaps extra time for their work, but the standards would be external without extra allowances for their language problems. One thing I will pick out of her conclusion is that students have to know what to expect in terms of "internal fairness" and that teachers have to become more educated about the various cultures and nationalities they are dealing with.
Photo by Sheila Webber: Bryggen, Bergen, September 2010
Posted by Sheila Webber at 09:08