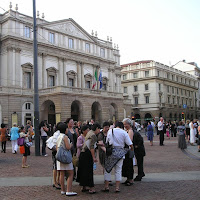 Another report from the IFLA/ World Library and Information Conference taking place in Milan, Italy. The main session for information literacy is today, a session organised jointly by the Information Literacy and Literacy & Reading Sections of IFLA. I will blog it in a few sections. The structure was to have a few talks and then a short time for discussion in groups: so this is a report on the first of three sets. The speakers did not have very long, but the papers are all online full text and I will link to them as I go along. The photographs are from the "librarians take over La Scala" event yesterday evening (a special concert at the La Scala opera house).
Susie Andretta (London Metropolitan University) started the session as keynote. She called her talk Transliteracy: a walk on the wild side. She made sure that she did not just started by mentioning the practical problems of transliteracy: in the setup here the video clips did not work properly, concluding “Microsoft doesn’t believe in transliteracy” (though I am not sure Milan conference centre is transliterate either, since my seating was determined by the one power socket in the room that wasn’t on the podium).
Susie played an audio clip of Sue Thomas defining transliteracy as the ability to read write, and interact across a range of media. The emphasis is on being able to move between media, and also the emphasis is on content creation. Susie illustrated this with an advert which shows a small child using different media to send a photo of his rabbit to his aunt (one of the “I’m a pc” Windows ads). She also showed a video of the Mindspot project in Aarhus, which is a youth library project, which includes young people (“mindspotters”) as part of the team. See also http://www.mindspot.dk/ Again, this is not a new idea (I remember the Yoker Youth Library in Glasgow, that was using similar principles of collaboration and user centredness), but it is incorporating the possibilities for technology and new communities/ activities.
Susie then gave quick sketches of four librarians who she interviewed to identify what transliteracy might mean to them (you can see more detail in teh full paper that I linked above). The first was Michael Stephens, a library & information academic from the USA. The 2nd was Bernadette Daley Swanson, who I know as HVX Silverstar in Second Life (this links to her video of me, apologies for self-promotion) and she was talking to Susie about the issue of intellectual property in virtual worlds. The third person was one of Susie’s students who is particularly keen on blogging, and sees that as a way of extending the reach of the service (interaction, current awareness etc.) 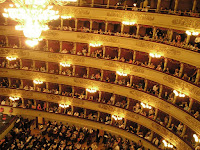 The third librarian was a collections manager in the UK, who started by saying that she wasn’t transliterate. However, it emerged that she belonged to the London and Information Knowledge Exchange, which uses a lot of social networking tools and therefore she was using them effectively to expand her professional network.
This was a very good presentation to start things off, and nice to have audio and video used. My position is still that this could still be termed information literacy, if you have a holistic vision of what information is. However, the aspect of moving between types of information and communication is an intersting thing to highlight, and think about whether this is something really new and what you might to to help people be information/trans-literate in this way
The next talk was from Sean Cordes (Western Illinois University): Broad horizons, the role of multimodal literacy in 21st century library instruction. He emphasised the way technology and need to interact is pervasive and won’t go away. Sean mentioned the number of literacies that people talk about e.g. multicultural literacies, and specifically multimodal literacies as the ability to manage and communicate across a range of media. He identified this as being pretty much like "transliteracy". He also referred to Foucault’s conceptins of “technologies” - of power, self, production ands sign systems, and that these can be interpreted in terms of the library user’s needs. He gave example of a grid in which people look at an object of interest (he used the term "text") and identify manifestations and then see whether these manifestations include video, gestures etc. (See his paper for lots more detail!)

Final speaker in this group was Mark Hepworth (University of Loughborough, UK), presenting a joint paper with Julie Brittain (Institute of Development Studies, UK): A method for the design, delivery and evaluation of an information literacy programme for development workers studying Participation, Power and Social Change. They were looking at ways of designing an intervention to develop the information literacy of development workers (students studying social change etc.). The first stage was gaining participation from the key people: academics, other staff, learners and librarians. This was an essential stage in terms of embedding it into the curriculum (rather than an add-on) and getting buy-in. This involved understanding the wants and needs of each of the different groups. The intervention started by asking the learners to map the domain (subect), starting to get comfortable with the language and nature of the subject. They used flip charts, and there was a lot of interaction, and they also had to reflect on the process. Students then reflected on the information landscape, thinking of it as a journey - thinking of the types of information, the difficulties they might encounter on the journey. They then spent time on understanding the norms and forms of communication in the field. This happened over 3 half-days.
They did do diagnostic test (to help the students reflect on their understanding, and help identify improvements for next time). This showed that some students benefited more than others. The mind mapping and processing were found particularly valuable. More time was needed for discussion, critical reflection and using online sources (practical sessions).
My own reflection: This has something in common with activities that we do with our first year information management students, to help them map their understanding of the discipine at different stages and engage with the process of research. Ironically, perhaps, at the moment the information literacy aspect of this is not brought out strongly at that stage, and I think we could do this a bit more.
There was time for one question after these 3 talks, and Linda Goff raised the issue of how not all students are at the same level in terms of text literacy or digital literacies. Sean identified the same points that we have done (in surveys in my Department), i.e. that students are very familiar with a few tools like Facebook, but are unfamiliar with a good number of other tools. Other panellists also agreed, and they identified need to support, encourage peer learning, and acknowledge the anxieties of people having problems. Susie also stressed the point that if you use technologies, which cause anxiety etc., you have to be sure that is actually pedagogically necessary. She gave the example of learners rejecting use of blogs, when they were very happy just using email.
The small group discussion after this covered a number of points. I put my laptop down at that point and didn't take any notes .... (I think) people agreed about the importance of context (i.e. the context of someone learning to be trans/information literate), the need for more librarian education in use of technologies in some countries, and we had some discussion around the use of the word "text" (i.e. as used by Sean).
Readers may be relieved to know that the other (next) two write-ups from this session will be shorter!
Posted by Sheila Webber at 14:44